The UCC forward line are a little bit like Corofin when they get going. Nobody takes too much out of it, everybody is on the move and they're all absolutely mad to get their hands on the ball.

NUI Galway defended heroically for lots of their Electric Ireland Sigerson Cup semi-final against the Cork kingpins, but it's next to impossible to keep them out for a whole game.

With Sean O'Shea knocking around, with Paudie Clifford racing in and with Jack Kennedy, Conor Geaney and Killian Spillane bombing on, they had too much firepower for their Galway opponents and their ability to cut loose and to make goal scoring chances just like that was the difference between the two teams in Mallow.

They created plenty of chances and there are few forwards in this country as deadly to finish them as Kenmare and Kerry star Seanie Ó'Shea. 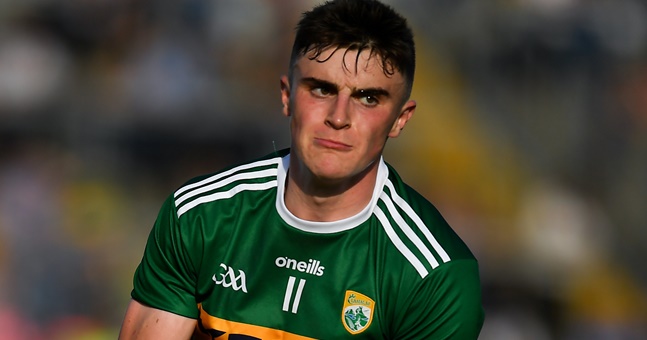 He ended his Electric Ireland Sigerson Cup semi-final with 2-3, 2-1 from open play and both of his goals were finished with composure, pace, power and bite.

"I suppose they both came from hard work out the field from other fellas turning over the ball...the bounce of the ball went my way today," he said modestely to Oisín Langan afterwards.

The goals he scored were nothing to be modest about.

See the first one here from Jerome Quinn's footage off the bounce as a deceptive dummy and a cool finish through the goalkeepers' legs sends UCC on their way. His second one was also very well taken.

"When we don't have the ball, it's all about how hard we can work to get it back. That lets us play the way we want to play then when we have the ball, try moving the ball with pace, nice attacking, quick football," he said after the game.

He's been flying it for county and for college so far this year, and it's no surprise that he's lapping up every minute of it.

UCC will take on St Mary's in the final on Wednesday after the underdogs came up with the goods yet again against UCC. Jarlath Óg Burns was the main man for the Ranch, the Armagh man's high fielding a true sight to behold.

His midfield partner Liam Devlin is also well able to fetch them, and they make for a dominant duo in the middle of the park.

Bring on the final.


popular
Freak injury forces Robert Whittaker to abandon title defence fight at UFC 234
The top 10 fastest knockouts in UFC history
"We did find him hours later and we made up." - How Flynn and his best friend came to blows in Croke Park
Dominick Cruz finally gives his side of infamous Michael Bisping bar altercation
"Munster was like playing for your local GAA club. The craic was 90"
Michael Bisping tears into Dillon Danis for 'trying to be Conor McGregor so hard'
The SportsJOE 12 o'clock quiz | Day 333
You may also like
1 year ago
Monaghan livewire lights up Glasnevin to seal Sigerson glory for DCU
1 year ago
The legend that is Pat Critchley has IT Carlow on brink of Sigerson history
1 year ago
Molloy braced for another clash as Sigerson and club fixed for same day
2 years ago
Letterkenny IT win Trench Cup after outrageous scoring run in final minutes
2 years ago
UCD stunned in Sigerson semis after being held scoreless for 38 minutes
2 years ago
It's happening again: Sigerson semis fixed for same day as All-Ireland club football last four
Next Page