Diarmuid Connolly will be kicking his competitive heels until August unless...

The Dublin footballer will serve out his 12-week ban after he accepted a charge of “minor interference” with an official [a linesman] during his side's Leinster SFC win over Carlow.

Dublin are back with a win. But Diarmuid Connolly couldn't escape controversy. Potential ban for this? #LeinsterGAA #GAA #GAAclips pic.twitter.com/w9EcI831If

There had been suggestions that Connolly would contest the charge but, on Friday night, that was dismissed. Connolly is now out on the reckoning for the reigning All-Ireland champions until August 27, which is just before this year's semi finals.

In his The Sunday Times column, former Kerry captain Paul Galvin called on officials and rule-makers to protect players like Connolly from being targeted by the opposition. He also disagreed with pundits Colm O'Rourke and Pat Spillane, who said Connolly should expect to be targeted.

There is nothing clever about targeting a player with shoulders, Galvin writes, and 'sledging to get him sent off'.

Galvin suggests that the Dubliner should not be a long-term worry for fans and backed him to bounce back well from his ban. He also throws out a left-field call for Connolly to consider. A return to an earlier love, if you will.

"I watched him hurl recently and he is inter-county quality," he writes.

"Dublin's hurlers will have Leinster honours and more on their minds over the next few years. At 29, he's young enough to hurl and revisit football if he wishes.

"The hurling world would welcome him I'm sure, even if the football world seems intent on exposing him." 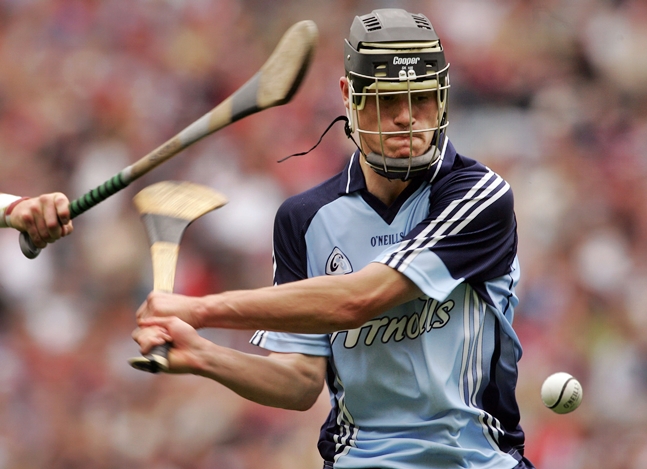 Connolly is indeed a decent hurler and often turns out for his club side, St Vincent's. He played for Dublin's U21 side and represented them in the 2007 All-Ireland final against Galway [pictured above].

Although he would still have to serve out his ban, Connolly the Dublin hurler would certainly be a sight to see in the 2018 championship and beyond.


popular
Warren Gatland mentions three Irish players as potential Lions captain
The SportsJOE 12 o'clock quiz | Day 221
"We're doing it for the group and for what's going on in the country" - Andy Farrell
Paul O'Connell names four Irish certainties for Lions, and one bolter
Two changes as Ireland name team for Six Nations title decider
"It was my real purpose during lockdown"
QUIZ: Can you guess the football club badge?
You may also like
2 weeks ago
"I don’t think it was any coincidence that I refocused on one sport shortly after"
1 month ago
Close bonds and basic skills: the Fenton formula
1 month ago
"My own mother would go to three games on Saturday, three games on Sunday"
2 months ago
"I'd say to fellas 'if you bring a friend and they stay playing, we'll give you a prize"
2 months ago
"That's a risk I'd be willing to take" - Byrne ready and raring for a championship
2 months ago
Goal disallowed in Dublin SFC because player wasn't wearing his gumshield
Next Page