All week, there had been chat about whether or not Donegal would start their talisman.

Last weekend, Donegal named Michael Murphy in their starting line-up against Derry, only to spring him from the bench in that quarter final win.

Murphy was named at No.14 by Declan Bonner for today's semi-final clash with Tyrone, and that is where he started. The hamstring issues that flared up a few weeks back did not seem to hold him back against the Red Hand county. That was one of the only positives for the Donegal captain, though.

After 27 minutes, with Donegal leading 0-7 to 0-5, Murphy stepped up for a spot-kick. Murphy sent Niall Morgan the wrong way but his kick struck the base of the Tyrone post.

Michael Murphy misses a penalty for Donegal in an eventful first half. He has since been sent off.

Watch live on @rte2 or highlights on #sundaygame from 9.30pm pic.twitter.com/RzVsOUjtcb

Soon after, Donegal were denied a clear free from close range and Tyrone rubbed it in by breaking up the field and slotting over a point.

It was to get worse for Donegal soon after, though, as Murphy fumbled a pass and then went to hack the ball away, only to connect with the shin of Kieran McGeary. 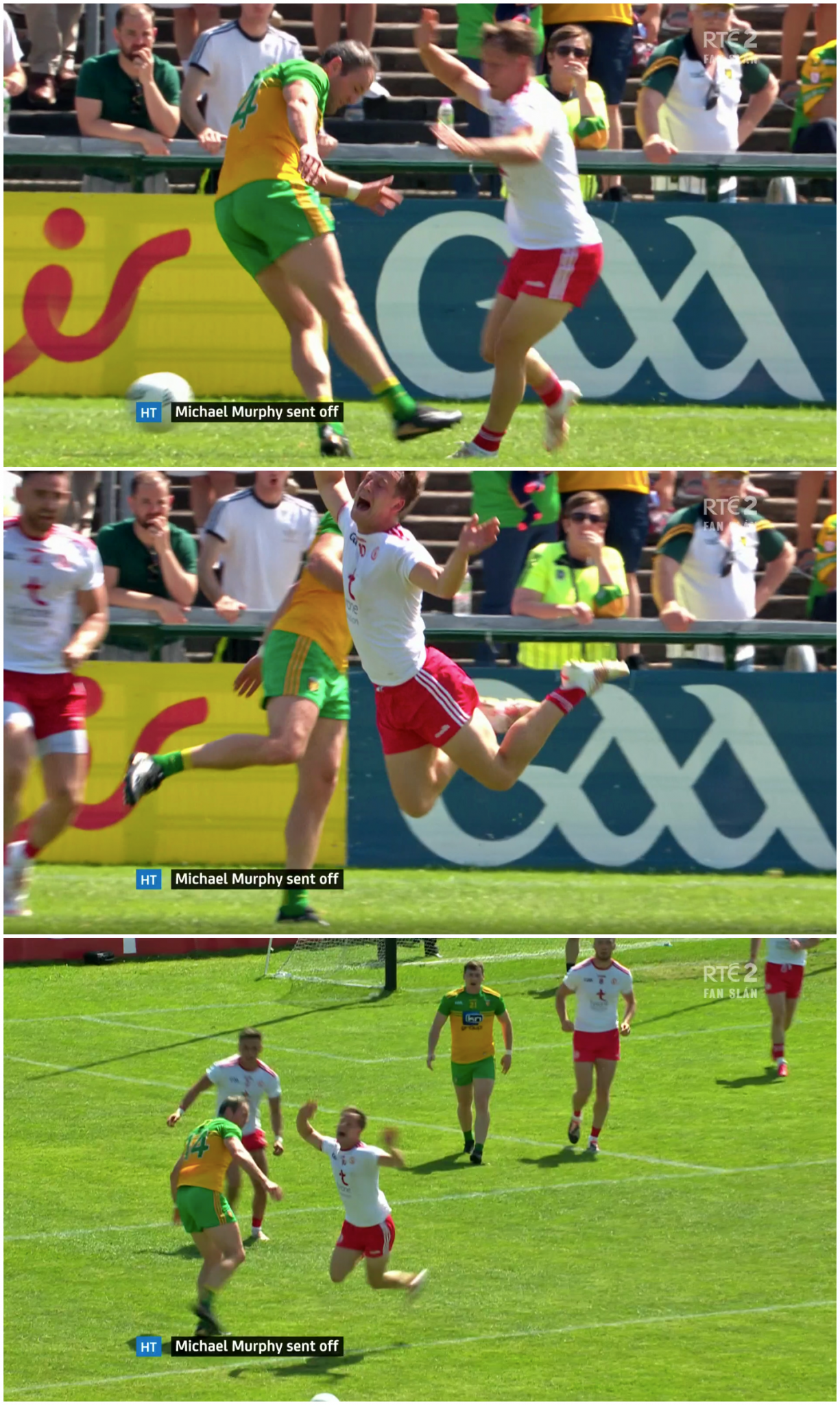 END_OF_DOCUMENT_TOKEN_TO_BE_REPLACED

Referee Joe McQuillan may have been harsh with the black card decision but, added to his earlier yellow, there was no debate about Murphy getting his marching orders.

"I think the yellow card was right in the first instance," said RTE pundit Sean Cavanagh.

"The second one, for me, that bit of sharpness that he may be lacking, from the hamstring injury, Michael Murphy ordinarily doesn't fumble a ball like that. Kieran McGeary, who is having a brilliant game, got in there in front of him.

"You could see, Michael knew. He knew there was an issue and he knew he was gone."

Pat Spillane and Sean Cavanagh are in agreement that the decision to send off Michael Murphy was the correct one, even if it should have been yellow rather than black to equal red.

Second half live on @rte2 with highlights on #sundaygame from 9.30pm pic.twitter.com/ztrJTAAptu

Fellow pundit Pat Spillane quibbled over the black card aspect of the caution but added, "Did Michael Murphy deserve to get sent off? Yes."