Two goals each from Mairéad Kavanagh and Rebecca Delee secured a second TG4 All-Ireland junior title for Limerick, who can look forward to intermediate football next summer.

The Munster girls scored three goals in five first-half minutes to pull clear of Louth, and although Kate Flood drove a Louth comeback after the break, Cliona Ní Cheallaigh and Delee ended their hopes with a couple of quick goals, while the impressive Kavanagh laid on three assists.

There was a very nervy start from both sides, with Louth off target from their first two close in frees before Flood slotted the game’s first score. Meanwhile, Limerick registered four wides and dropped another two into Una Pearson’s hands before Catríona Davis levelled matters at a point a piece in the 15th minute.

But Limerick were well on top and had played most of the first period inside Louth’s half. And in a blistering spell they put the game beyond their Leinster opponents.

The first goal arrived from Kavanagh following an assist from Davis, and her shot found the net via a deflection off Eimear Byrne. It was as unlucky a deflection as there is, the ball rebounding off her foot and looping into the net.

A confident Kavanagh added a great point from the right moments later to stretch Limerick’s lead, but better was to come.

After 22 minutes a rapid exchange of passes between Davis and Kavanagh freed Delee and she rattled the roof of the net, and one minute later Kanavagh soared highest to flick Davis’s free to the net for a 3-2 to 0-1 lead. There was a hint of square ball about the goal, but Limerick were very good value for that lead, which they carried into the interval. 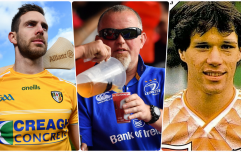 END_OF_DOCUMENT_TOKEN_TO_BE_REPLACED

While Louth had tried their best to crowd out the Limerick attack in the first-half, it was their own forward line that suffered most from the tactic, and after the restart they pushed captain Flood into the full-forward line, and she kicked two of three consecutive points for her side.

But Limerick continued to patiently work the ball through the hand and with Kavanagh unstoppable up front – she laid on two goals in a minute for Ní Cheallaigh and Delee – they ran out convincing winners.

Is that Clíona Ní Cheallaigh goal the killer blow or can Louth find a way back?@LadiesFootball ar @TG4TV #ProperFan pic.twitter.com/WIvoD3cKyZ

The passion in Limerick's player of the match, Rebecca Delee's post-match interview showed how much it meant to these ladies.

By Declan Rooney at Croke Park.


popular
"When Sean Boylan was around, you didn’t need a psychologist or a counsellor - he did it all himself"
The SportsJOE 12 o'clock quiz | Day 136
The daily diet of Manchester United midfielder Jesse Lingard
COMPETITION: Answer this survey for a chance to win a fabulous stay at the Trident Hotel in Kinsale
James Ryan's misfortune opens Leinster and Ireland doors for Ryan Baird
The diet of a modern day rugby player compared with a top jockey
A starting XI of the best free agents available this summer transfer window
You may also like
10 months ago
“They had to do fundraisers there two weeks ago. Anything I have asked of them"
3 weeks ago
The SportsJOE 12 o'clock quiz | Day 109
4 weeks ago
"We haven't got that excuse anymore" - Kickhams primed for Dublin championship
4 weeks ago
Na Piarsaigh's coaching set-up a juvenile's dream
4 weeks ago
QUIZ: Can you name all of these 1990s GAA stars?
1 month ago
The SportsJOE 12 o'clock quiz | Day 105
Next Page