Back then, it was all just chat.

Kieran Molloy had the tough decision, the bad experience and his journey from Offaly to Santry, from an All-Ireland club semi-final to the second half of the Sigerson decider is a well-worn horror at this stage, only 11 months later.

And, still, with all the controversy and injustice of it, with all the forewarning and the nationwide desire to see a healthier, more sensible GAA fixtures structure, it's happening again. 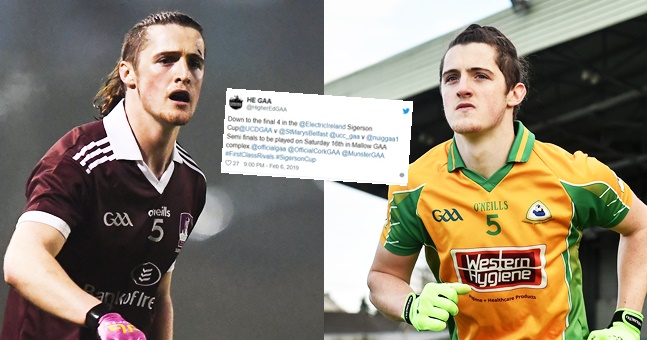 It's happening again. Kieran Molloy was the hero for NUI Galway as the Corofin man's first half g...

The draw for the semi-final of the Electric Ireland Sigerson Cup clashes directly with the All-Ireland club football semi-final.

So both Kieran Molloy and Liam Silke are supposed to be in Carrick-on-Shannon for 1.30pm on Saturday 16 February to take on Gweedore with their club Corofin for a place in the All-Ireland decider. Meanwhile in Cork on the same day, both their colleges NUI Galway and UCD will contest Sigerson semis and, once again, the same pair of players who were affected last year, are faced with a decision again this year.

Back in December, Molloy spoke on The GAA Hour about the prospect of a potential February clash again but even he, with all his first-hand experience, just assumed it wouldn't come to it this time around. It was before Corofin won the Connacht title and before the colleges competition even got under way but, whilst it was looking way ahead, it was a very real possibility that the All-Ireland champions would win one game and the Sigerson finalists might be knocking around the latter stages again.

"I would be worried but it shouldn't happen," Molloy said back at the start of December.

"If it did, you'd imagine they'd be able to put one game back maybe a couple of more hours or whatever.

"It is worrying to think I could have to make that decision again if we do well with college."

And, right now, that's a decision he does have to make again but, even with a rescheduling of times, it's unlikely and unreasonable to get two guys from Leitrim to Cork and fit to go for another 60 minutes for another All-Ireland semi-final.

Last year, Silke picked up an injury in Corofin's narrow win in Tullamore. The Galway outfit went down to 14 men very early in the game and had to slug it out before Molloy raced to north Dublin and came on at the start of the second half.

"Ah, adrenaline took over," he recalls.

"You don't even think about it. When the game was in the balance up in Dublin... it wasn't hard to come on, but after the game I really felt fatigue after it. But going up on the journey, I didn't really feel it in my legs because it didn't even come into my mind, I just wanted to get up there."

END_OF_DOCUMENT_TOKEN_TO_BE_REPLACED

If the club and college clash is unfortunate enough, talk of county barely comes into it at this stage.

Only Ian Burke started for the Tribesmen in the 2018 championship (of the players from Corofin) and their cases are not helped when they miss most of the season because of their club commitments. So Molloy and Silke and the rest of them have been available for their county up until last week to better serve themselves and the team but it has to take a back seat for a time now.

For Molloy, that means his year is a constant loop. County football, into club championship, club provincial, Sigerson Cup, club All-Ireland and, somewhere in there, the county has started back or never really stopped.

"Well, no down time but I suppose if you don't think about it too much, it's kind of easy to keep them all flowing into one another.

"You know, you'd like a bit more down time but, if you can't get it, what can you do?

He'll be busy next Saturday.


popular
'Make him hurt, make him yours' - How the Springboks ruled the world
In 86 seconds, Patrick Bamford becomes English football's voice of reason
Springboks legend Tendai Mtawawira tells us what he really thinks of Ellis Genge
Jose Mourinho is the picture of happiness and health after Spurs sacking
'Beast' Mtawawira is a big fan of Mike Ross' Lions front row
Jose Mourinho is about to step up and become the hero football needs
"We did find him hours later and we made up." - How Flynn and his best friend came to blows in Croke Park
You may also like
1 year ago
Sigerson Cup Team of the weekend
2 years ago
Team of the Sigerson Cup
2 years ago
"Their hands are tied with the league...it's ridiculous, you could play the Sigerson first"
2 years ago
Magical Sean O'Shea the difference as UCC do the business
2 years ago
GAA team of the weekend
2 years ago
Sean O'Shea has Mallow drooling but Jarlath Óg Burns is some man to fetch
Next Page