He knew what he'd done straight away.

Tyrone finally got over the line against their old rivals Donegal, in a thrilling tie that finished Tyrone 0-23 Donegal 1-14.

Michael Murphy missed a penalty and then got sent off after receiving a yellow and a black card in succession. 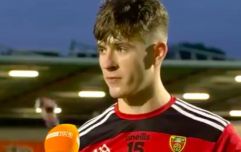 END_OF_DOCUMENT_TOKEN_TO_BE_REPLACED

Darren McCurry kept his fantastic form flowing, kicking seven points, while Conor McKenna came off the bench to score a vital point. He then made a brilliant block in defence before running the ball out, setting up another score for the Red Hands.

Kieran McGeary got man of the match however, with a brilliant performance. In the first half alone he kicked three scores when the game was in the melting pot.

Tyrone are now set to play Monaghan in the Ulster final, in a mouth-watering match-up, but the question remains as to where the final will take place.

Kieran McGeary’s face at the end when he realises his mum is going to see him swear on live TV 😖😅 pic.twitter.com/x0e7ejyzfv

BBC Sport NI's Thomas Kane put the question to the half-forward and his answer was priceless.

"Final in Croke, yes or no?" asked Kane.

We can take that as a yes then.


popular
Brendan Ó Dufaigh gives a powerful interview on an emotional night in Ulster
Jamaica teammates are as frosty after Thompson-Herah's history-making 100m win
Full player ratings as South Africa leave Lions battered, bruised and beaten
Cheslin Kolbe somehow avoids red card after leaving Conor Murray in awful heap
Paul O'Donovan busts the cliches and leaves the mystery behind him in one more emphatic interview
Warren Gatland gives his take on that dangerous challenge on Conor Murray
McIlroy and Lowry right in the mix for Olympic gold in Tokyo
You may also like
1 day ago
"This could be a one-point game" - It's too close to call between Tyrone and Monaghan
2 days ago
Donegal's Brendan Devenney responds to Jim McGuinness' claims about the game being "soft"
2 days ago
The GAA TV schedule this weekend is simply unmissable
4 days ago
"All of those boys are conditioned to be top class inter-county players" - Mayo's fitness levels are crazy
4 days ago
County star reveals just how much free gear the players get every season
5 days ago
"He's almost flawless" - Paudie Clifford's performances have drawn comparisons to a certain Kerry legend
Next Page