There is no stopping that man.

When the Tralee Warriors basketball club was formed in 2016, Kieran Donaghy was one of its founding fathers. That was a time when, as only people with his drive and charisma can do, he brought Tralee's rival clubs St Brendan's and the Imperials together to give the town its own Super League club. Back then, nights like these will have been his raison d'etre.

Growing up you see, Tralee was a different town. Basketball was booming and as a youngster, he dreamed of playing for the Tralee Tigers who, between 2003 and and 2008, won two Super League titles and two National Cups.

END_OF_DOCUMENT_TOKEN_TO_BE_REPLACED

In 2009, due to financial issues, the Tralee Tigers were disbanded and that was that. From there, seeing as they had no team playing in the country's top-tier, basketball in the town took an almighty hit but rather than accept it Donaghy had a vision. Somewhere in between winning All-Irelands with Kerry and county titles with Austin Stacks, he found the will and the time to chase down another lifelong goal.

He brought the boards from the Tigers and the Imperials together and, although describing it as "at times, like a UN peace-keeping" mission, Donaghy found a way, when in 2016, the Tralee Warriors were established.

Given their rich history as a basketball town, it was no surprise that Tralee were quickly back to winning ways. A first Super-League arrived in the 2018/2019 season but the dream was always the National Cup.

That arrived in jubilant circumstances on Saturday night when, after a 88-75 win over C&S Neptune, the Warriors won their first ever National Cup.

There is no stopping that man 🏀

Having helped in no small part to establish the Tralee @warriors_bc club in 2016, Kieran Donaghy got his rewards yesterday.

It was always the dream to win the National Cup and, after some near misses, he helped them over the line last night 🏆 pic.twitter.com/Hpjzy10vnE

At 39 years of age, it's a credit to Donaghy that, just a week after losing a Munster final with Austin Stacks, he's still going strong and he's still as influential as he ever was. What a sports-man. 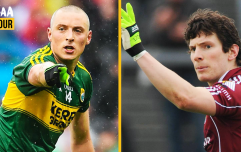 END_OF_DOCUMENT_TOKEN_TO_BE_REPLACED

"It's right up there. We've promised cups, maybe a bit sooner than we should have, but it's been a great journey," he said afterwards.

"There will be huge celebrations. Fair play to Micheál Martin for lifting the restrictions just in time for our cup celebrations! The game is thriving in Tralee, there's a huge amount of effort going in with kids so this is huge for them to see this today. When they go home shooting tonight, like I was when I was a kid, they'll be going home and they'll want to come back here to play with Tralee and that's what they'll want to do."