Kerry manager Peter Keane has made two changes to the side that defeated Galway by a point in Tuam last weekend.

Brian Ó Beaglaíoch and Kevin McCarthy have both been recalled to the side with Ó Beaglaíoch replacing Shane Enright at corner-back while McCarthy comes into the full-forward line in place of Dara Moynihan who shifts to wing forward with Diarmuid O'Connor dropping to the bench.

Kerry are the only team in Division 1 that have yet to lose a game with Keane's side gunning for their fifth consecutive victory following previous wins over Galway, Dublin, Cavan and Tyrone. 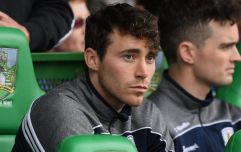 END_OF_DOCUMENT_TOKEN_TO_BE_REPLACED


popular
"Then we came along and we just won most competitions we were in"
"Emotions will be charged" - Sean O'Brien backing Ireland for Triple Crown
QUIZ: How well can you remember this season's Premier League results so far?
"Anyone less belligerent would have backed down..."
Carragher pushes all the right buttons and Keane delivers in gold
James McClean issues open letter about his reasons for not wearing a poppy
Ashling Thompson's gym routine features four handy exercises

You may also like
1 month ago
Compulsory headgear in rugby? SportsJOE at the BT Young Scientist
2 months ago
The team meeting and the WhatsApp arse-lick - every club team's December
2 months ago
Increased contact among proposed rule changes for Camogie
2 months ago
Jim Gavin steps down as Dublin manager
3 months ago
Five key players which helped Dublin secure their historic Five-In-A Row
3 months ago
QUIZ: Can you guess the GAA jersey sponsor?
Next Page