"This Meath team have been the team to beat since the start of the year."

Tyrone have secured their place in the All-Ireland Minor final against Meath after beating Cork 0-23 to 1-06.

The Red Hands were in full control for the majority of the match and their shot selection in particular was very impressive. 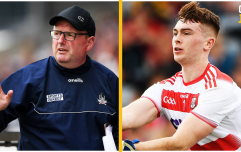 END_OF_DOCUMENT_TOKEN_TO_BE_REPLACED

Captain Cormac Devlin, was central to pretty much everything and although The Rebels battled very hard, Tyrone just looked a cut above them today.

Meath are the Ulster side's destined opponents, and have been in devastating form this season, overcoming a strong Sligo side to book their place in the final earlier today.

"We knew they were going to come at us, this Cork team is very very good, and our heads could have dropped when we missed the penalty.

"These lads done well, they responded to it and they've done that all year, but there's a massive challenge coming up now, it's hard to even look forward to that yet, but this Meath team have been the team to beat since the start of the year, so that's our next goal.

"See the friends and families, I said before that the world has been turned upside down, and just how important Gaelic is, and you see that there, just the smiles on people's faces.

"It's a lovely week for Tyrone, the seniors prepare for their semi-final, thank God for Kerry - fair play to them.

"Now we have a minor final to look forward to as well, so it will be a good week, and hopefully we can put on a performace."

You may also like
3 weeks ago
The scenes in Newbridge as the biggest hit and hope ever knocks Moorefield out
1 month ago
Niamh Kilkenny scored a point so amazing it's worth watching again...and again
1 month ago
Sigerson's striking a sight to behold
1 month ago
Cork captain Linda Collins revels in super-sub role to clinch thrilling semi
1 month ago
"He might have got injured, but he'll be a delighted man now." - Casey's hips don't lie
1 month ago
"You don't want to see that ever on the field again" - Colm Parkinson on Cian Lynch incident
Next Page