Nobody was hurt. We would have had a better All-Ireland final. There was a score to be settled. You must be 100% sure.

The take-up on Richie Hogan's red card was 50:50. We'll deal with the naysayers first.

The above were the lines being rolled out. Richie doesn't have a bad stroke in him. Cathal Barrett made a meal out of it. The game was tight up until then. There was a score we repeat, a score to be settled.

What does matter is what happened in the 33rd minute of the All-Ireland senior hurling final.

When Richie Hogan made a mistake.  When he was in the wrong. When he showed a streak of indiscipline to leave his elbow in on Cathal Barrett when he shouldn't have, and when it was unnatural to do so. 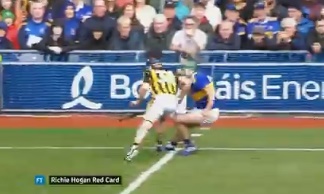 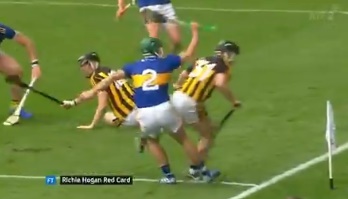 James Owens' decision was in line with the rule-book.

Which reads as follows in relation to such strikes.

"A Category III infractions on part 2 of the GAA's rulebook is "To strike or to attempt to strike an opponent with arm, elbow, hand or knee."

James Owens' decision was a simple one. Richie Hogan had struck Cathal Barrett with an elbow to the head.

This isn't a referee being overly catty. Nobody wants to see players punished for harmless and unintentional arm strikes when going for the ball. Hogan's elbow was more than two foot away from the ball.

This was a red card. And it shouldn't really matter if this was All-Ireland final day or if it was club championship in Tipperary next weekend. The fact that the red card was going to alter the course of the game thereafter shouldn't enter the referee's decision making process. The bottom line is it was a red card offence and should be treated as so.

END_OF_DOCUMENT_TOKEN_TO_BE_REPLACED

Looking back on it, the two players involved had some previous. They clashed in the opening few minutes of the game. With Richie Hogan attempting to control a ball, his marker came in with a swing across his body. Barrett however, had clearly attempted to play the ball in this action. His hurl was literally inches away from connecting with the sliotar.

Those insinuating that these two fouls are much of a much need to consider that Barrett had made a clear attempt to play the ball, the type of attempt that goes on multiple times in every single game of hurling. And actually happened twice in this game too. Barrett's strike to Hogan's head was a near mirror image of Conor Fogarty's 24th minute strike on Brendan Maher.

If you were to issue red cards for such goings-on, then there would be numerous red cards in every single game. A yellow perhaps, but a red is a huge stretch.

For those saying that Cathal Barrett should have seen red for strike on Hogan early on.

Then by that logic so should Conor Fogarty for his clip on Bren Maher at 23.45.

Neither are red cards btw, it's still hurling pic.twitter.com/AmmX0mUA6h

Whether or not this strike, which left Hogan visibly marked as the Croke Park cameras continually and disappointingly showed on a repetitive basis after his red card, irked him and riled him up for a shot at Barrett is unconfirmed.

But there's no denying that he was the one in the wrong, and not James Owens.


popular
"Conor Murray was hung out to dry"
Kilkenny youngster pulls off the no-look hand-pass once more
"Ireland don't ever do anything different and that's the worry" - Mike Tindall
Tyson Fury reveals what happened when he sparred Anthony Joshua
"If Murray is playing that first half for England, he's probably Man of the Match"
Four features of Mason Greenwood's goal vs Watford that shows he is going to the very top
ROG hits the nail on the head assessing Ireland's performance
You may also like
1 month ago
"I'm nearly the nan now at this stage!" - Aishling Moloney
1 month ago
GAA JOE club hurling team of the year
1 month ago
"I just love the responsibility, the more of that, I'm well able to handle it"
1 month ago
In defeat, Jerry Kelly dies with his boots on in coming of age final display
1 month ago
"You don't want to change a winning formula" - Maher and McCormack the key for Borris-Ileigh
1 month ago
1-32 table of the most competitive hurling championships in Ireland
Next Page