Irish Olympian retires from boxing to return to his GAA roots

It's all about the club.

Adam Nolan had a hell of a run at it. The welterweight boxer bows out from the sport at the age of 29 and he takes with him precious memories, records, and some titles too.

The Wexford native joined club mate Katie Taylor in the London 2012 Games and, in doing so, Bray Boxing Club became the only club in the world to qualify two boxers for those Olympics. 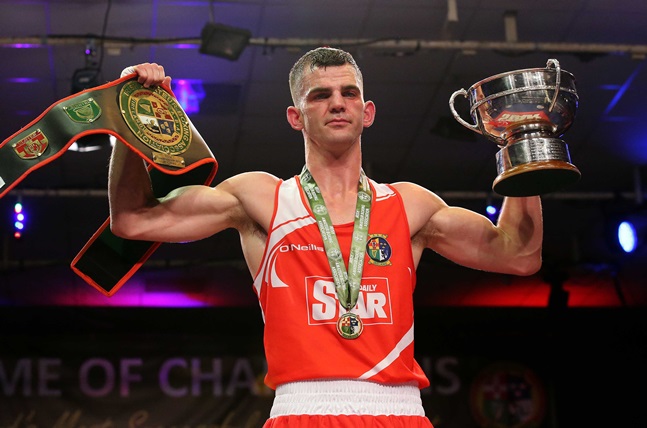 END_OF_DOCUMENT_TOKEN_TO_BE_REPLACED

The Garda reached the last 16 after beating Carlos Sanchez from Ecuador but, ahead of the Senior Elite Championships next month, he has called it a day.

A local of Wexford hurling powerhouse Oulart The Ballagh, whom Nolan was with last year for another county title, the 29-year-old has indicated that the ash will get the full focus of his sporting obligations for the next few years.

In a classy statement on Irish-Boxing.com, he announced his retirement and his intentions for the future.

"I’ve decided to call it a day on climbing into the ring, a decision that did not come easy and gave me plenty of restless nights over the last couple of months," Nolan said.

"To my family for all your support and encouragement along the journey – thank you, I owe it all to you. I couldn’t have asked for two better mentors in Pete Taylor and Billy Walsh, the memories I shared with them are something special.

"To Padraig Murphy for taking me to the top level of physical fitness, he always had me in great shape going in to every championship. A massive thanks to my bosses in Bray and in particular John Fitzpatrick. None of this would have happened without his generosity and understanding.

"Most importantly, thank you to every loyal supporter who I’ve shared the good and bad times with, you wont be forgotten. I’ve had no regrets and for me it’s time to hang up the gloves and enjoy a few years of hurling back home with Oulart the Ballagh."

END_OF_DOCUMENT_TOKEN_TO_BE_REPLACED

Sure what else would you be doing?

Republic of Ireland international Seamus Coleman has already signaled his intentions to get back to his club when he retires from Everton.

You can go to the other side of the planet, to the top of a different sport, and you can go the whole way to the Olympics as a boxer, but you'll still always be a club person at heart.

You don't choose your club, it chooses you.