Beaten 70 points by Wexford in the Leinster minor championship, the scoreline - 13-20 to 0-1 - was like something we'd never ever seen before.

Unfortunately for those Kilkenny minors who'd barely trained before that game - what's rare, moves the needle and though it's selfish and very ignorant - so long as it's outside our own county, rarities like this one are met with amusement more so than concern.

So that team bore the brunt of it. Jokes were made outside of the county while inside, most people were embarrassed.

DJ Carey is Kilkenny. One of the greatest hurlers of a great generation of Kilkenny legends, whenever the marble county is mentioned in conversation, it's his face and name that jumps to mind. 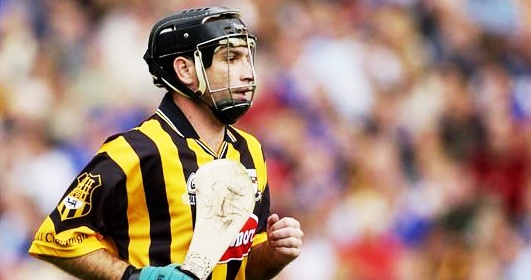 And that's not just because of his achievements in hurling.

An affable personality to go with those luminous gifts, DJ always sought the best for his county. Presenting medals is where you'd find him, coaching youngsters at Gowran, encouraging development squads in Kilkenny, he loves giving back to the organisation that gave him so much.

"Most people think I'm a bit mad in some ways anyway," he says in a brilliant interview on Thursday's GAA Hour Show with Colm Parkinson.

"Ah no, at the end of the day, I've travelled the length and breath of the country presenting medals and doing some coaching, and I've been asked a fair bit, maybe even outside of the county, to be a coach. And I've always said it, always and everywhere, I would prefer to be involved in tiddly winks in my own county than being manager somewhere else. Purely and simply because there's an awful lot of work that needs to be done, whether that's with under-12s in my own club or 14s or whether that's a development squad in Kilkenny or whether that's football."

END_OF_DOCUMENT_TOKEN_TO_BE_REPLACED

And that's why that minor mauling provoked such a response. Many won't know that he grew up idolising Pat Spillane and the Kerry footballers. That he once as an under-12 opted to play football, rather than hurling for Kilkenny - unlike many in the county, he's not alien to the big ball and so he didn't think twice about volunteering his time.

"From a pride point of view, I was very disappointed with that result," he continued.

"With all due respect to Wexford, and Wexford football, they're not Kerry, they're not Dublin and yet they were so, so far ahead. So I rang Ned Quinn (The chairperson of Kilkenny GAA at the time) and we said there's no point in looking at the minor championship this year or next year - the young fellas have been out of football since they were in primary school - they probably haven't played a whole lot of football. So it was to try and get them as they come out of primary school and continue on from there..."

So DJ, along with a number of other good Kilkenny GAA people, threw their lot in behind the Kilkenny under-14 footballers. The county opted not to play in the next three Leinster minor championships, with the plan instead for this team to be coached properly the whole way up along, before the county would return to compete in the Leinster championship in 2019, with the aim to restore belief and pride within Kilkenny football circles.

And on Tuesday night, that's what they did.

From getting beaten 70 points by Wexford three years ago, the @KilkennyCLG minors have come a long way. 👏 https://t.co/lPt3s2aSpG

They may not have won, but they ran Louth close and there's something to build on now.

Typically, DJ doesn't take any of the credit for that. He deflects it onto those who have worked alongside him, as well as the parents of the players.

"I was happy to do it, Seamus Norris, Angela O'Cullen, Thomas Rossitter, Donal O'Carroll, we did it on the back of - if people wanted to play football, we were going to be there. We're hurling people all of us, so we might have done a little bit better if we had football knowledge over the team, but we put in an effort...The main credit has to go to the parents though, who have driven those young fellas to training...

"It's easy travel to minor, under-20 or senior hurling training because there's a badge of honour. But driving from Mooncoin or Piltown up to Kilkenny for training on miserable wet evenings, that's not the glamour side of it...They have to take a huge amount of credit for this.

If we could bottle the spirit and selflessness of DJ Carey...

You can listen to the Carey interview, and much more from Thursday's GAA Hour Show here.

popular
QUIZ: Can you name all 24 champions of the English football league?
QUIZ: Name the countries these World Cup footballers play for
The SportsJOE 12 o'clock quiz | Day 77
You'll need to be on top form to get 20/20 in this 1980s footballers quiz
SportsJOE 2000s Football Quiz | Round 4
The SportsJOE 12 o'clock quiz | Day 76
If you can answer this one Premier League question, you really know your stuff
You may also like
1 week ago
"That's done at the end of a sprint, jumping off one leg" - Kevin Feely on the art of fetching
2 weeks ago
“Talent wise he’s as good as there has ever been in Gaelic football"
2 weeks ago
"You had no other choice but to get down and dirty with these boys"
2 weeks ago
"My fondest memory is definitely beating the Dubs in Parnell Park, that's just f*cking brilliant"
3 weeks ago
JJ Delaney tribute: A hurling legend made of different stuff
1 month ago
Arsenal S and C coach on how to keep it ticking over during the lay-off
Next Page