The club championship is underway in Mayo, as the county players look to leave their disappointment of their All-Ireland final loss against Tyrone, behind them. 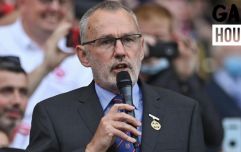 END_OF_DOCUMENT_TOKEN_TO_BE_REPLACED

These stars came up against their county teammate Tommy Conroy, who despite being on the losing end of the game, managed to bag the man of the match award for a terrific performance.

Afterwards, TG4 interviewed the Mayo captain about his return to club football, and how he dealt with yet another All-Ireland final loss.

"When we win, when we lose, it's not something I pay too much attention to," said O'Shea, who scored four points for Breaffy against The Neale.

"I've been off the grid for the last couple of weeks. When you lose, everything is wrong; when you win, everything is right. Obviously, there's a balance every time you play.

"We were disappointed a couple of weeks ago. We've got to learn and move on. Seeing the likes of Tommy (Conroy) playing here today, you see the talent that's in the county, no doubt, we'll pick up and go again next year.


popular
Paul Scholes calls a spade a spade after comeback win
It's often forgotten that Tommy Walsh began his career with the same stardom and promise as David Clifford
Derry club win county final factfile games with extravagant set of jobs
Jordan Larmour primed for a season to remind everyone how good he is
Shane Walsh: 'That's not how I was coached to play football. No one was coached to play football that way'
Paul Scholes says Paul Pogba is a "daydreamer" and Fred and McTominay are "limited footballers"
"Where Johnny Sexton is so important to us now is being able to pass the baton"
You may also like
1 month ago
Mayo make two changes to team that played Dublin in semi-final
2 months ago
Aidan O'Shea's reaction to being subbed off against Dublin revealed a lot about his character
2 months ago
"What was Aidan O'Shea doing? He had a stinker" - Aaron Kernan reacts to O'Shea running onto the field during altercation
2 months ago
Oisin McConville slams Philly McMahon and Aidan O'Shea with one cut-throat line
2 months ago
Aidan O'Shea gets into it with Philly McMahon as Mayo stun Dubs
2 months ago
Aidan O'Shea better get to a telly soon after his All-Ireland semi-final admission
Next Page