The best day of the hurling year?

Quite possibly. It's a pity for real die hards who would have gone to both the Munster and Leinster finals. It's a pity for the Joe McDonagh Cup too but there's no point in complaining now.

The hurling delivered again. In the Gaelic Grounds, Tipp and Limerick were poised up until a second half capitulation for the Premier men. That was mainly due to the Limerick's backs, the supreme Sean Finn and Mike Casey sherrifing the square while Diarmuid Byrnes and Declan Hannon dominated out in front of them.

Up front, a sharp Peter Casey took his chance. He must be one of the youngest looking senior man-of-the-match winners in some time.

Congratulations to Peter Casey @LimerickCLG who has been named the @LittlewoodsIRL Man of the Match from today’s @MunsterGAA SHC Final! pic.twitter.com/TSBMPVpzOS

Across the country in Croker it was Wexford's day. AJ Redmond lit the touch paper with an irresistible display in the minor final while Chin, McDonald, O'Connor, Foley and co. took care of it from there.

Liam Óg McGovern is unlucky to miss out on this team, and he's only just pipped by Paddy Purcell and Cian Lynch, both of whom were sublime for their counties in midfield.

Adrian Mullen, TJ Reid and Mark Kavanagh can all feel hard done by not to have a place in the half forward line, but none of O'Connor and Bergin couldn't miss out either.

Brian Hogan mans the goals for Tipperary, the Lorrha club man made a string of exceptional saves from Limerick attackers. 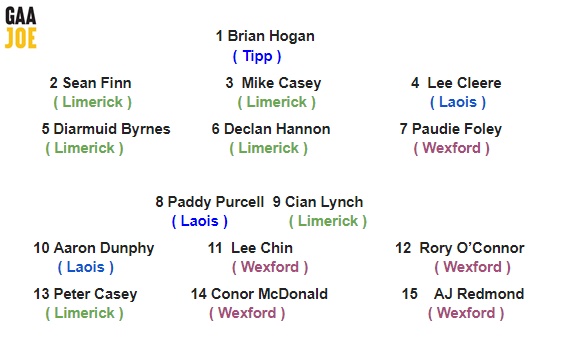 Here's your #WeAreHurling round-up of another great weekend.

Limerick the team to beat

Limerick are the Munster champions


popular
"If there's a stadium show happening in Europe, it's happening in Ireland"
In defeat, Jerry Kelly dies with his boots on in coming of age final display
Conor McGregor makes surprise call-out after Cerrone destruction
Shane Walsh provides one of the all-time great captain speeches as Tullaroan take a thriller
Dana White livid with late stoppage on UFC 246 undercard
Leinster get Saracens as Champions Cup quarter finals confirmed
"I've never seen anything like it; he caught me way off guard" - Donald Cerrone on McGregor
You may also like
4 months ago
"Liam's always demanding more" - Lar Corbett on Sheedy
5 months ago
Was Hawk-Eye wide of the mark in All-Ireland Final?
5 months ago
The Sunday Game panel name Hurling Team of the Year
5 months ago
Bubbles O'Dwyer delivers when it matters to put himself on legendary track
5 months ago
Sunday Game panel split on Hurler of the Year decision
5 months ago
Watching nation lauds TJ Reid after lightning start at Croke Park
Next Page