Twitter had a joygasm as Kilkenny edged Waterford in a pulsating, breathless replay

Kilkenny were on the ropes at Croke Park last week. This time out, they got their noses in front and eventually buried Waterford.

The opening exchanges were sensational - three goals traded in the first 10 minutes. Waterford's second goal edged them ahead, midway through the half, but the Cats responded by upping their intensity and scoring accuracy.

The Déise went over 10 minutes without scoring but eventually got going in the second half. Austin Gleeson was a joy to watch but Kilkenny continued to take chances, clear-cut and scrappy. 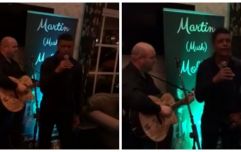 END_OF_DOCUMENT_TOKEN_TO_BE_REPLACED

They led by five points at one stage before a Waterford rally levelled matters. Kilkenny were not done yet and eeked out another chance, and score. Pauric O'Mahony had a chance to bring the game to extra time but his free dropped short. Richie Hogan hit a superb insurance point to end the contest and send his side back to Croker.

Down but rarely out. Kilkenny march on.

Outrageous game of hurling! Gutted for Waterford but once again Kilkenny show why they are so good! You can't but admire them @TheSundayGame

If you ever wondered if hurling is any good, watch that match! What a game! @WaterfordGAA should be proud!

Poor Waterford. Incredible two games. Wish they drew so we could watch it all again next weekend! #KKvWAT

Over to ye, Tipp and Galway.

All you need to know about a massive weekend on hurling in the latest GAA Hour. Subscribe here on iTunes.