Carlow players celebrated their 33-year wait for promotion from Division 4 of the Allianz National Football League by chanting 'we are going up' after their three-point win over Antrim at Corrigan Park on Sunday.

Carlow forward Darragh Foley scored the decisive goal after he pounced on an error from Antrim goalkeeper Chris Kerr, who misjudged the flight of a Paul Broderick gifting Foley a chance to score.

Their coach, Steven Poacher posted a video of the team's celebrations on the bus home from the game and it looked like some craic.

That winning feeling, that buzz, that's why these lads got into the GAA in the first place. That's what it's all about. 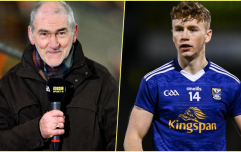 END_OF_DOCUMENT_TOKEN_TO_BE_REPLACED

Kristan Healy, CJ McGourty and Matthew Fitzpatrick all chipped in with scores to bring Antrim to within a single point of Carlow, however, substitute Stephen Beatty's dismissal for an off-the-ball clash with Carlow defender Jordan Morrissey.

Antrim did manage to keep pace with Paddy McBride, McGourty and Odhran Eastwood all offering scores to keep the Saffrons within touching distance, however, Morrissey and Eoghan Ruth tagged on some late points to ensure that Carlow would confirm their place in Division Three of next year’s Allianz National Football League.

They enjoyed that one.