This SportsJOE reader made the prediction of the season

Have you got your breath back after that?

Croke Park hosted 180 minutes of hurling this weekend. Yes, you read that right, 180 minutes! The All-Ireland hurling semi-finals were two classic games that will live long in the memory.

Galway led by Clare by nine points at one stage in the first-half of Saturday's titanic tussle which ended in a draw after extra-time. We go again next Sunday to decide on that one.

We thought that game couldn't be topped, but it was. Cork and Limerick's first ever encounter at headquarters also went to extra-time on Sunday before the Treaty men prevailed by four points in the end.

Limerick themselves came back from six points down with around 15 minutes remaining to force the extra 20 minutes.

Now, who would've thought that not one, but two semi-finals would finish level after the 70 minutes? It has never happened before you know.

Well, there was one who predicted it.

Sean Breathnach contacted the SportsJOE desk straight after the game to share his amazing punt on the two games. 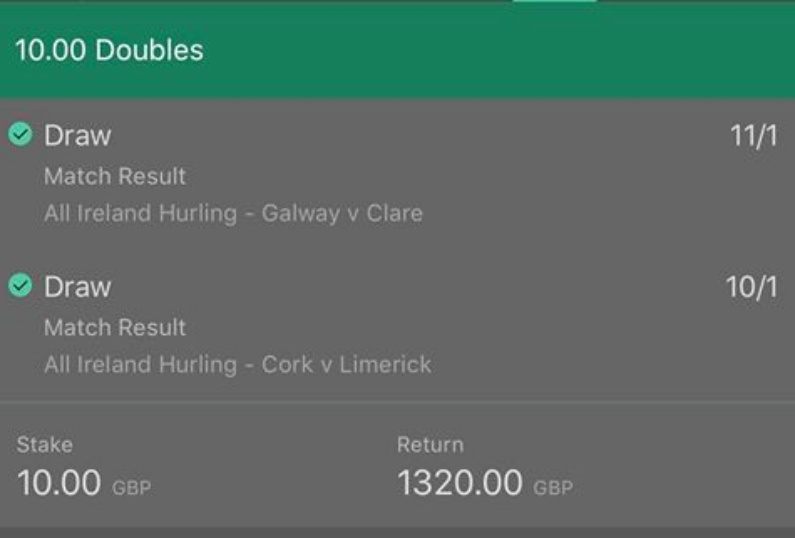 A massive return off a €10 bet. That is a 132/1 shot. Well done Sean. You will have half the country jealous reading this. Kudos!

popular
The SportsJOE 12 o'clock quiz | Day 108
QUIZ: Name the country these football teams play in
QUIZ: Can you name all of these 1990s GAA stars?
QUIZ: Name these 6 Premier League stars that never got an Ireland cap
Na Piarsaigh's coaching set-up a juvenile's dream
SportsJOE 2000s Football Quiz | Round 9
QUIZ: Name every player that's scored three or more Premier League hat-tricks
You may also like
2 months ago
"The bigger the challenge, the more Fitzy would want to keep them scoreless"
2 months ago
"He had no interest in the trappings of success, he just wanted to achieve it"
3 months ago
St Patrick's day memories: Rural Caltra with one of the great underdog triumphs
4 months ago
Corofin clean up in club team of the year awards
4 months ago
Shane Walsh is ready to rule for Galway
5 months ago
GAA JOE club football team of the year
Next Page