Club hurling is hotting up.

It was county final day in Kilkenny and in Wexford and there were star performances all over. In Ulster, it was the provincial first round while the Munster club camogie championship kicked off in some style.

In Kilkennny, it was the intermediate final that really caught the eye. Tommy Walsh is still going strong at 36 and the Kilkenny legend's 1-2 from full forward played a huge part in their triumph. His namesake 'young Tommy Walsh' was just as effective at full back while John Walton sniped four from play from midfield. Padraig Walsh was also in supreme form for them.

The star performer of the day however, was livewire corner forward Peter Walsh who hit 2-3 at crucial times and terrorised Thomastown all day long.

In the senior final, Darren Mullen cleared the world of ball for Ballyhale while Richie Reid was also prominent in defence. Cousins Colin Fennelly and Adrian Mullen were their best attackers.

Down in Wexford, Luke White made a few good saves for St Martin's while Jack O'Connor was a real leader at centre forward, hitting two from play and catching plenty of ball.

Up in Ulster, Slaughtneil are back in another Ulster final and Karl McKaigue helped keep Middletown at bay. Dunloy will be their opposition in the final, with both Ryan McGarry and Nigel Elliott the most impressive performers in their win over Ballycran.

In the camogie, captain Aoife McGrath played a leading role for Drom and Inch who scored a famous one point win over Sarsfields while across the water, Ben Conroy sniped 0-12 in the London final at Ruislip.

Camogie/Hurling team of the weekend in full 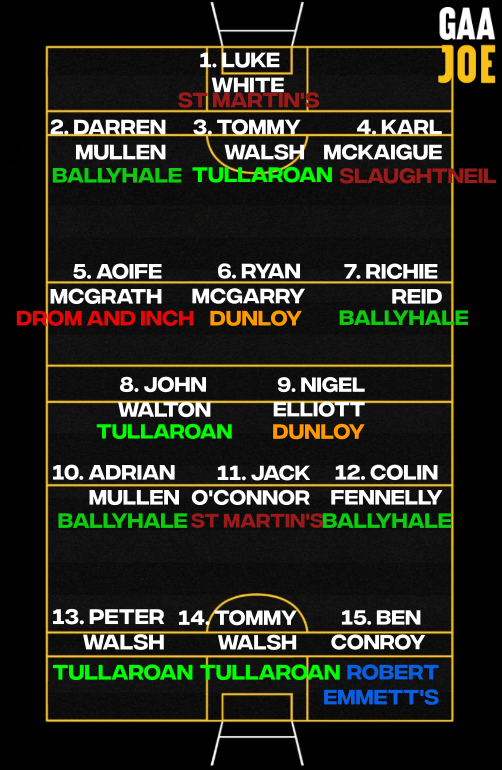 
popular
"If Murray is playing that first half for England, he's probably Man of the Match"
Jacob Stockdale and Johnny Sexton not spared by English press
Baz & Andrew's House Of Rugby - Twickenham carnage
Triple Crown wrenched away as England scrape Ireland off their boots
'Were they up for it more than us? That's my responsibility' - Andy Farrell
ROG hits the nail on the head assessing Ireland's performance
Tyson Fury reveals what happened when he sparred Anthony Joshua
You may also like
1 month ago
GAA JOE club hurling team of the year
1 month ago
GAA JOE club hurling team of the weekend
1 month ago
Shane Walsh provides one of the all-time great captain speeches as Tullaroan take a thriller
1 month ago
Tullaroan: A hurling identity
1 month ago
Rural clubs the last standing but it's defeatist to say that's what sets them apart
1 month ago
1-32 table of the most competitive hurling championships in Ireland
Next Page