The Royals brought the game back to 1-13 each in the dying moments after a monstrous free from 45m by Patrick O'Rourke sailed over the blackspot.

END_OF_DOCUMENT_TOKEN_TO_BE_REPLACED

The point came after Mickey Newman scored a goal on the hour mark to leave just two points between the sides entering the closing stages, after the Dubs looked on course for a very comfortable win having led at  half time by 0-9 to 0-5.

However Jim Gavin's side showed their experience to edge the game in additional time and will take on Kildare next week in the final after they overcame DIT by 2-15 to 0-9 the other last four clash.

In Ulster and Mickey Harte's Tyrone secured a seven point win over Antrim in their McKenna cup clash by 1-11 to 0-7. Kyle Coney got the all important second half goal after Tyrone led by 0-7 to 0-4 at the break.

The semi's are as follows:

In Munster and Waterford shocked Cork by beating the Rebels by 0-8 to 0-7 to seal their place in the final of the McGrath Cup and book a place with UCC next weekend.

END_OF_DOCUMENT_TOKEN_TO_BE_REPLACED

In Connacht's FBD league Gavin Duffy once again failed to make his expected debut for Mayo in their loss to Roscommon. Pat Holmes said it was due to work commitments as the Connacht champions lost out by 2-12 to 1-10. NUIG and Sligo ended in a draw 0-8 each and Galway got the better of the students of GMIT by 1-13 to 0-5 while Sligo edged Leitrim by 2-9 to 1-10. 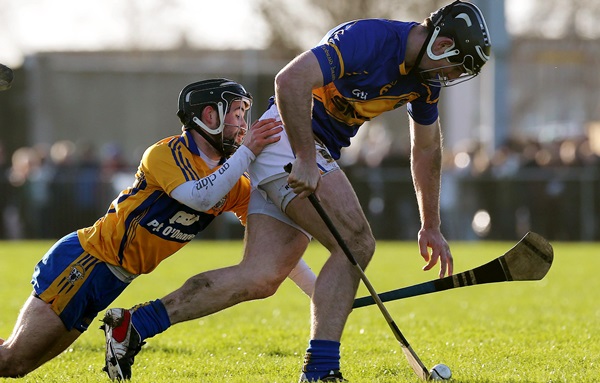 The Clare seniors hurlers had a disastrous 2014 but have begun 2015 with a tasty win over Tipperary in the Waterford Crystal Cup this afternoon.

Davy Fitzgerald's experimental side  included a number of the U21's who claimed three-in-a-row of titles last year starting in Sixmilebridge.


popular
Noel Gallagher left 'covered in blood' after headbutt from Ruben Dias’ dad
Cutting through the contradictions from one of the worst television segments of the year
Aiden McGeady details the abuse he suffered after playing for Ireland instead of Scotland
Roy Keane shows great comic timing after Jack Grealish party invite
BBC apologise after accidentally posting mocking Man United message live on TV
France the sore losers as Ireland Men reach first ever Sevens World Series final
The FootballJOE Pub Quiz: Week 38
You may also like
2 weeks ago
"I realise on the far side that all of that stuff is not what it's cracked up to be." - 2011 reunion allows O'Sullivan to take it all in
2 weeks ago
"Jesus, no, if he finds out, he'll think I'm going soft now." - the social life of inter-county GAA players
2 weeks ago
Buff Egan calls it as Laois skin the Cats in O'Moore Park
2 weeks ago
From a hurler to a super-sub to a starter who's determined to keep his place
3 weeks ago
"It's important to me to get our second team a bit closer to the first team" - Brogan does it for the club
2 months ago
"The players coming through aren’t of the same calibre.” - Christie on Dublin's eventual demise
Next Page