Referee David Gough went card crazy in the final stages of a fiercely contested encounter at the Athletic Grounds, this afternoon.

Armagh followed up their Allianz Leagues victory over Dublin at Croke Park, last weekend, by beating Tyrone in a game that had a wild finish.

END_OF_DOCUMENT_TOKEN_TO_BE_REPLACED

Greg McCabe got an early goal for the Orchard County and they led 1-2 to 0-0 after a quick, clinical start. Rian O'Neill was sticking points over the bar from all angles and a Jason Duffy goal saw the hosts lead the All-Ireland champions 2-8 to 0-4 at the break. 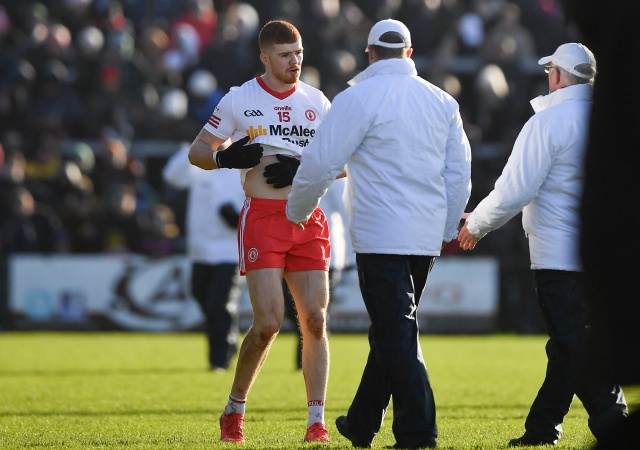 Cathal McShane speaks to umpires as the teams leave the pitch at half-time during the Allianz Football League Division 1 match between Armagh and Tyrone at the Athletic Grounds. (Photo by Brendan Moran/Sportsfile)
Advertisement

END_OF_DOCUMENT_TOKEN_TO_BE_REPLACED

Tyrone looked a lot better in the second half as they clawed back the Armagh lead in a second half played with real bite.

Armagh kept their side of the scoreboard ticking over, though, and kept Tyrone at arm's length. There were a few stoppages for injuries and tangles, leading to six minutes of time added on.

In that time added on, an almighty skirmish broke out. 27 of the 30 players on the pitch were involved in a flash-point that led to a scuffle.

As matters calmed down, Gough clearly saw it as Tyrone being the aggressors. He flashed one black card to Tyrone then doled out four red cards, three to Tyrone players and one for Armagh. The Tyrone Twitter account described the moments of high tension as 'a short tumult'.

The match was blown up not long after it restarted and Armagh had prevailed six point winners. They are leading the way in Division 1 after an excellent start.