The immediate concern for many Kerry fans, almost as soon as that Minor All-Ireland had been bagged, was that Clifford would be tempted to head Down Under for a stint of Aussie Rules.

Not long after that, the Fossa clubman told Radio Kerry's 'Terrace Talk':

The teenager was called into the Kerry senior squad ahead of the Allianz Leagues campaign and he has acquitted himself well. Kingdom boss Eamonn Fitzmaurice has now named in in a full forward line alongside Paul Geaney and James O'Donoghue for his side's championship opener against Clare, in Killarney.

Former Kerry star Marc Ó Sé joined Colm Parkinson on The GAA Hour to look ahead to the game [from 49:00 below] and he spoke very highly of Clifford. 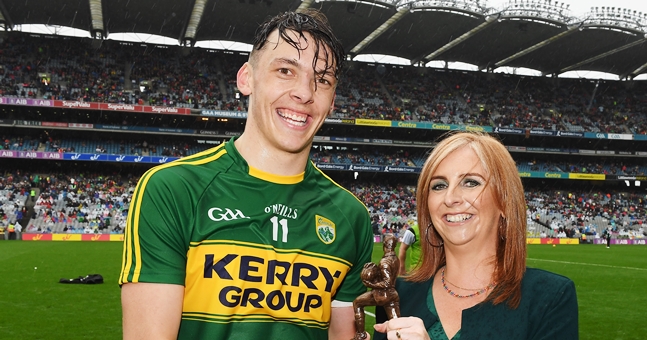 END_OF_DOCUMENT_TOKEN_TO_BE_REPLACED

Ó Sé believes that only two players from Kerry's All-Ireland winning squad of 2014 have maintained such good form that they are automatic starters. Paul Geaney and David Moran have been consistently top-class in recent years. However, Ó Sé can see that the Kerry management have infused the team with a number of young talents.

"We can see from 2004 when Jack O'Shea came in. Paul Galvin and Aidan O'Mahony put their hands up for jerseys, got their jersey and held onto their jersey," the five-time All-Ireland winner said. "The same thing has to happen here, where new leaders come on-board."

On Seán O'Shea and Clifford stepping straight up from Minor to Senior, Marc Ó Sé commented:

"Gooch (Colm Cooper) made it, Darragh Ó Sé did it, Seamus Moynihan did it. Now Clifford, I've seen him and he's performed admirably in games, in particular against the stronger teams where you knew he'd be up against it.

"This fella is just.... I mean, if you stand alongside of him, just, the size of him! He's 6-foot-4 and he's built accordingly. I watched him in the league games and he can win low ball and high ball.

"Particularly with the high expectations that were placed on him, he's answered those calls. I know it is only league football and championship is a huge step-up but... I think the good thing about him is that he comes from good stock, he's a very level-headed young lad and that has to stand to him...

"I'm not trying to put pressure on him or anything but the fact that he is so level-headed will certainly stand to him."

As he demonstrated in this summer's senior championship has proved, the faith in Clifford was definitely merited.

popular
The SportsJOE 12 o'clock quiz | Day 144
"No doubt he'll say he played shit like he normally does, but I thought it was a good game."
Portumna prodigy streaks to eight shot Irish Boys win with bogey free round
There's a very simple reason why PSG have signed Maxim Choupo-Moting
SportsJOE 2000s Football Quiz | Round 12
The SportsJOE 12 o'clock quiz | Day 143
Three teams Leinster can pit against each other to prepare for Munster
You may also like
1 month ago
"He was a nightmare to play against...you were just a sitting duck"
3 months ago
Closed doors no issue for O'Brien
4 months ago
"I'd play 18 holes of Pitch n Putt" - Jack O'Shea's All-Ireland final prep pure class
4 months ago
St Patrick's day memories: Rural Caltra with one of the great underdog triumphs
5 months ago
"I was kind of going 'I'm not a Kerry player" - Donaghy's story a brilliant watch
5 months ago
Mayo issue update on crunch Allianz Leagues clash with Kerry
Next Page