Darryl Branagan runs himself into the Healy Park grass for Kilcoo

There are no half-measures in Kilcoo.

And when the mountain men of county Down go, they go unbelievably hard. 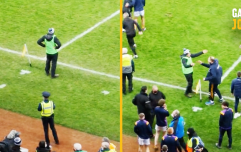 END_OF_DOCUMENT_TOKEN_TO_BE_REPLACED

Mickey Moran's side displayed levels of fitness rarely, if ever before seen on a club GAA pitch in Sunday's Ulster final and this non-stop energy, combined with an impressive clinical edge, took them to a first ever Ulster title at Healy Park.

Quarter finals, semi-finals, finals. They've had their fill of near misses - the closest coming in 2012 and 2015 when they lost to Slaughtneil and Crossmaglen in the respective finals.

They weren't for losing this time around.

There was an ace up Kilcoo's sleeve this year. Mickey Moran was the difference. The legendary Derry man came in as the team's manager in 2018 and he brought a proud record along with him.

Mickey Moran with another huge win for one of the GAA's most decorated CVs.

He managed Slaughtneil to 3 Ulster finals, winning all 3.

The difference this year 👇

"You don't realise how good that man is," says Darryl Branagan. pic.twitter.com/THifjVsADP 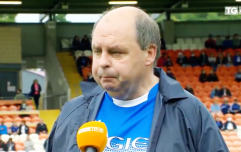 END_OF_DOCUMENT_TOKEN_TO_BE_REPLACED

In this decade alone, he'd brought Slaughtneil to three Ulster finals. They never lost one. He saw out the decade in a fitting manner, guiding Kilcoo to his fourth Ulster club title in ten years.

Phenomenal stuff from a phenomenal man. Kilcoo knew what they were getting.

And Moran delivered the goods. Playing like a true Mickey Moran team, Kilcoo were honest and gritty. They were fit and hungry.

They fought for every ball, never gave an inch and the sight of their players galloping up and down the field in unison was breath-taking. Their stamina was peerless.

And though Naomh Conaill battled hard and wouldn't go down until the final whistle, they just couldn't live with the Down side's intensity of effort. They scrapped like hounds.

This was perhaps best shown up in the 38th minute by their remarkable captain Darryl Branagan. He started the move as he did all day, cutting through the blanket with verve and abandon. He wouldn't stop 'til he'd finished it either.

Three men tried to tackle him. They knocked him, but they couldn't stop him. He went again - and the willingness to make that support run sums up the man's fitness - and somehow summoned the energy to strike a bullet home.

Darryl Branagan just wouldn't take no for an answer herepic.twitter.com/2cYIpWiDS9

That put them six up and though Anthony Thompson and Charles McGuinness never stopped, Kilcoo had the work done.

Their first ever Ulster title. This was as sweet as they come.

You may also like
11 months ago
Down u20 star dedicates Ulster victory to his late teammate in powerful interview
1 year ago
"I'm not the biggest fan of academy systems" - Paddy Tally believes we should be developing young GAA players differently
1 year ago
'Overtraining' is not the main issue for county players, says Down boss Paddy Tally
1 year ago
McGrath still as energetic as ever even after all these years
1 year ago
Gifted Mallon delivers the goods for Down once again
2 years ago
GAA JOE club football team of the year
Next Page