Finian Hanley can recall Damien Comer doing some jump tests, back in 2016, with a strength and conditioning coach that was brought in to help get Galway ready for the league and championship.

"'This lad's jump,' Hanley remembered the S&C coach saying, 'is something from a different realm. He's in NFL territory'."

END_OF_DOCUMENT_TOKEN_TO_BE_REPLACED

The strength and power may have been from a different realm, but Damien Comer is from Annaghdown, nestled beside Lough Corrib, and he has made it to the biggest stage in Gaelic football.

Saturday at Croke Park saw the 28-year-old score 2-2 to drive his Galway side past Derry and into the All-Ireland Final. The Tribesmen are back in the final throw-down for Sam Maguire and, in Damien Comer and Shane Walsh, they have two of the biggest scoring threats in the land.

On The GAA Hour [LISTEN from 37:10 below], host Darran O'Sullivan discussed the impact of a dialled-in Comer with Eamon McGee and Hanley, his old inter-county teammate. 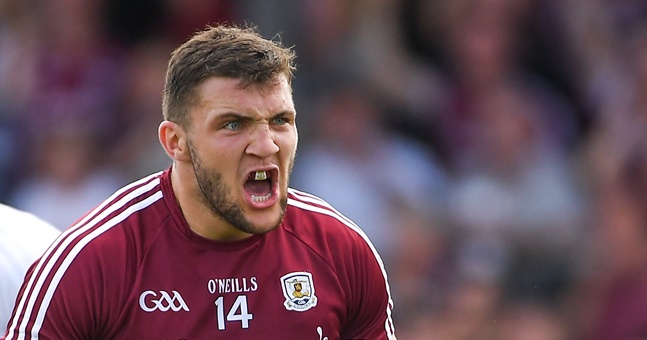 Damien Comer was first brought into the Galway panel at the age of 20, in 2014. (Photo by Piaras Ó Mídheach/Sportsfile)

With the scores tied at 0-4 going into the second half, Damien Comer came up huge for Pádraic Joyce's side in the second 35. He scored two goals in a short spell to break the Derry resistance and, ultimately, bring about a comfortable win.

END_OF_DOCUMENT_TOKEN_TO_BE_REPLACED

"We talked about leadership," said Eamon McGee. "Damien Comer showed that leadership. He just stood up and, again, it was such a privilege to watch that; to see that in action."

While McGee is not convinced Galway will beat Kerry in the final, he believes 'they'll make them think'.

"When you watch Comer," the former Donegal defender added, "it is unbelievable to see how it's, 'Give ME the ball. I'LL make something happen'.

"When you are playing against defences, we often talk about kicking games but sometimes there are not holes to kick it into. Sometimes, when you're out on the pitch, you can't see that space to kick into. It is up to fellas to look at their man eye-to-eye and just take them on.

"It could just be that forward hand-pass, where you add that bit of pace. That's what Comer did. He added that bit of explosion. He has that robust structure. He has all the skills in the world, but he knows, 'If I have to go into contact here, I'm big enough and strong enough to go through fellas'." 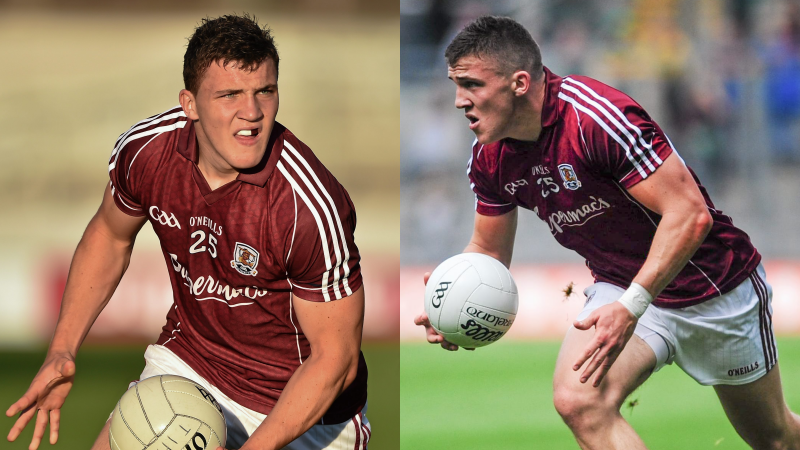 Damien Comer made an instant impact with Galway, from his 2014 championship debut on. (Credit: Sportsfile)

'The words maturity and immaturity come to mind'

Finian Hanley was on the Galway panel for the first few years when Damien Comer burst on the scene. The pair helped their county to the Connacht title together in 2016.

"I used to train with him a few years ago," he recalled.

"You might be on the 'B' team and you'd mark Comer. It'd be a nightmare! He's just lean in and you'd know all about it.

"You might get him on the odd off-day, but not in those A vs. B games, before a big championship match. The power was just frightening."

Unstoppable on his day, injuries and some team struggles often made it seem that a player of Comer's natural talent would never make it as far as an All-Ireland Final.

Hanley has seen the Annaghdown clubman come on massively in 2022, and getting a finals crack at Kerry is just reward.

"I'll give him a compliment and criticism at the same time," Hanley stated. "Damien, over the last number of years... the words maturity and immaturity come to mind.

"When he first start playing for Galway, and the first couple of years after that, it was very much Damien getting the ball, and he'd bull you out of the way. He was like an Under-10 kind of a player. It was like, 'I'm the man, and I'll kill everyone and score'.

"And he's had to mature, on the pitch and off the pitch. His father passed away at a really young age. I'm sure at home, he's become the general. He comes from a fantastic family. They're great people - great Galway people from Annaghdown - and he loves Galway. But sometimes he gets to much on him. 'Why is it not happening for me all the time?'

"Then the injuries came and he broke his foot. He was getting a bit disillusioned about the whole thing. Then, this year, injuries went away, he got really, really fit and looks way fitter than he has over the past couple of years. He way more mature and his performance on Sunday was not just the typical bulling lads out of the way, him using his body, and that little bit of mess-acting on the pitch, as well. That was in his locker before.

"He has changed all that and turned into an absolute leader. That performance on Saturday was so mature from him, all around. Everything he did was the new Damien Comer. We know his ability and we know he has strength and power, but up here [tapping his head] he got it. Hearing him speak afterward, I was delighted for him. He deserves that performance."

As Hanley finished up, McGee jumped in.

"Hearing that, from you, has made me love him even more. Hearing about that journey he has been on.

"You say he's robust. He's just a monster! Did he work in [Taaffes] bar in Galway a few years ago? I'd say if there was any trouble, a look from Comer and I'd say it calmed a few lads down!"