"A couple of strange calls, in that regard."

Much of the talk, heading into the All-Ireland, was about David Clifford and Shane Walsh, but they were sharing column inches and headlines with Sean O'Shea and Damien Comer.

O'Shea and Comer had been the men to grab their respective semi-finals by the scruff and get their counties into the final waltz, on Sunday.

END_OF_DOCUMENT_TOKEN_TO_BE_REPLACED

On the big day, for a host of reasons - tactics, form, underlying issues, nerves and great defence - both struggled to make an impact on the final. O'Shea kicked three frees but was scoreless from play, while Comer finished without a score.

On the latest episode of The GAA Hour [LISTEN from 18:20 below], host Darran O'Sullivan looked back on the final - and the contributions of Damien Comer and Sean O'Shea - with guests Eamon McGee and Finian Hanley. 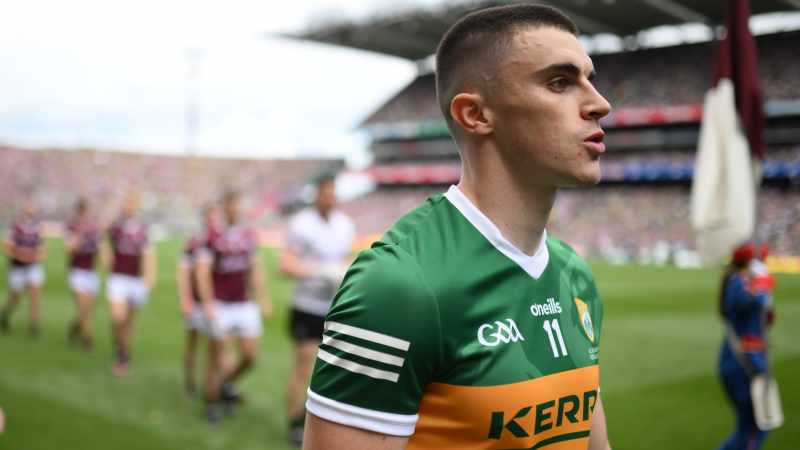 Galway's reluctance to change it up

END_OF_DOCUMENT_TOKEN_TO_BE_REPLACED

O'Connor did not hesitate with changes, bringing on Killian and Adrian Spillane on at half-time. Micheál Burns and Paul Murphy came on during the second half and Jack Savage was a temporary blood replacement for Paudie Clifford. Some of the players that did not get minutes, off the bench, were Tony Brosnan, Gavin Crowley and Stefan Okunbor.

END_OF_DOCUMENT_TOKEN_TO_BE_REPLACED

Galway did bring on Finnian Ó Laoí and Cathal Sweeney in the second half, while fellow sub Eoin Finnerty was making his championship debut. "That's unheard of," said Hanley.

While Hanley believes Padraic Joyce did not entirely back his bench to make an impact, the performances of Seán O'Shea and Damien Comer brought about a livelier panel discussion.

Eamon McGee wondered if O'Shea, who had scored the last-minute free to defeat Dublin in the semis, was carrying an injury, on Sunday, as his first half performance was unusually sluggish. O'Sullivan noted that, and mentioned that a few of the Kerry starters were not as sharp as usual.

While O'Shea was eclipsed by Kerry teammates David Clifford, Stephen O'Brien, Killian Spillane and Graham O'Sullivan, he at least made some scoring contributions. Damien Comer had to settle for winning some dirty balls back and coming back down the field to have any sort of impact on the final. 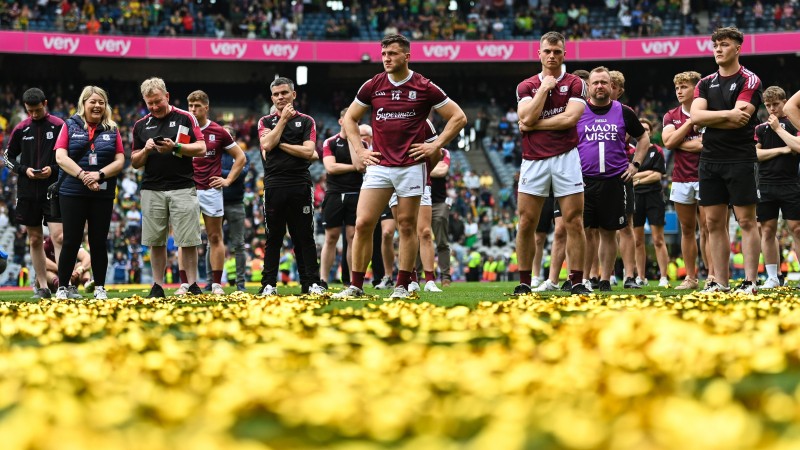 Damien Comer of Galway and teammates watch the trophy presentation after their side's defeat to Kerry. (Photo by Harry Murphy/Sportsfile)

The first 50 minutes of the game saw no prisoners taken as both sides responded to the other with fast breaks, counters and scores. There were some moments when both defences flooded back to block up passing lanes, but it was very often break-neck stuff.

Hanley noted how David Moran, who had been sick in the lead-up to the game, and Paul Conroy - two midfielders in their mid 30s - struggled, at times, to keep a handle on matters.

Eamon McGee was at the game, on Sunday, and said he was involved in a debate, up in the stands, about possible Galway substitutions. He asked Hanley and O'Sullivan:

"Would you have taken Damien Comer off?

"I don't know whether it was a deliberate ploy and they wanted to make Shane Walsh the point of the attack and move Comer out to free up space. Up until he caught a kick-out in the last 10 minutes [and set up a Cillian McDaid score], he didn't touch leather.

"I would have said leave him on, but there was a few people sitting beside that said, 'You've got to make the call to get Comer off'."

"It wasn't going well for Paul, in midfield," says Hanley, "so I think the obvious decision was putting Damien to midfield, as he can play there. It would have suited him, on a Diarmuid O'Connor or a Jack Barry, physically.

"Maybe he would have caught a few kick-outs, which would have inspired us. It wasn't going well for Paul, so maybe taking him out, bringing Damien back and putting someone into the full-forward line... that would probably be the switch I would have made, to get him into the game a bit more."

O'Sullivan added that Comer did get a vital turnover, on Paul Murphy, and argued that the forward 'needs to be that focal point' and can't be on the fringes. "He seemed a bit lost... he found it hard to get into the game."

"There was question marks over whether he would have the power or pace to stick with Comer, or whether he's be bullied," says O'Sullivan, "but, jeez, he stood up to the challenge yesterday."

Hanley mirrored those remarks and noted how Foley had got a hand in to bat the ball away from Comer on the first kick-out he attempted to claim. "The boys would have seen that and said, 'Foley is at it today. He's not going to give Comer a sniff'."


popular
Antonio Conte 'banishes' four Tottenham players from first-team
"He can add something to our attacking line up" - Jamie Clarke signs for Northern Irish soccer club
Ranking the best county GAA songs of all-time (32-1)
"I’ve never heard someone say something as stupid” - Katie Taylor blasts Jake Paul's rematch comments
Barcelona allowed to register four new signings, but Jules Kounde misses out
Roy Keane makes three surprise picks in Man United's greatest Premier League team
"It was unfair on the Galway backs” - Tomás Ó Sé admits that Kerry benefitted from unfair rule
You may also like
5 days ago
Referee mic was trialled during hurling final and proves why it should be introduced permanently
5 days ago
Colm O'Rourke belives that Shane Walsh should at least wait a year before making club transfer
1 week ago
Antrim star saves someones life in the morning and then scores 1-15 for his club in the evening
1 week ago
"I just can’t agree with it" - Darran O'Sullivan critical of Shane Walsh's transfer to Kilmacud Crokes
1 week ago
Mayo star scores an outrageous total of 1-17 in Chicago championship game
1 week ago
The GAA hasn't gone away you know - Some great games on TV this weekend
Next Page