David Clifford and Shane Walsh did their respective counties proud, but Kerry had the scoring nous when it counted. Those two men top our All-Ireland player ratings.

Galway hit the front through a Shane Walsh free and a Johnny Heaney score, that was deflected over by a diving Stephen O'Brien. The Kerry defence looked to have big holes in it, in those early stages.

END_OF_DOCUMENT_TOKEN_TO_BE_REPLACED

David Clifford got Kerry off the mark with a score after claiming a fine attacking mark. Walsh responded with a glorious curling effort from 40 metres out. The Galway forward made it 0-4 to 0-1 after slotting over a free that he had won. Clifford's free settled Kerry nerves, but two curled efforts from Paul Geaney going well wide would not have.

Walsh curled over another sublime effort, on the run, to rouse the Tribesmen before Geaney did find the target after clutching and attacking mark. On 18 minutes, a David Clifford point from play cut the Galway lead to a point. Two minutes later and the scores were level, thanks to O'Brien. When Walsh answered back with a free, Clifford's response was another attacking mark point. 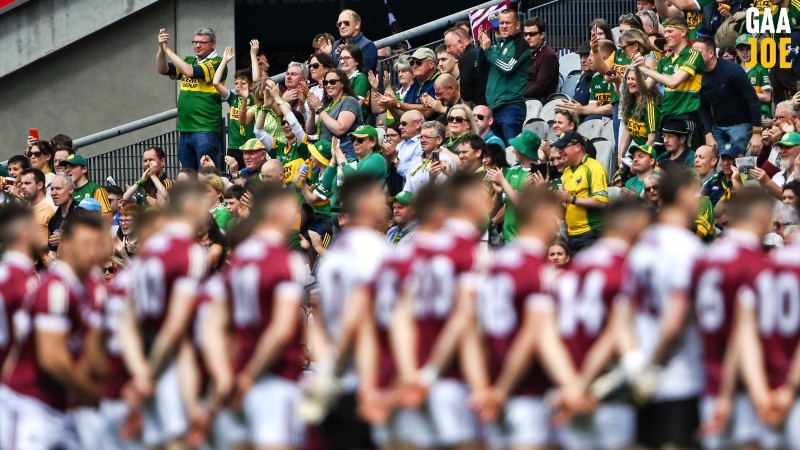 END_OF_DOCUMENT_TOKEN_TO_BE_REPLACED

There was a lull in scoring, from both sides, but still time for a ropey Conor Gleeson free that was not punished, and a yellow card for David Clifford as he clattered into Sean Kelly. Jack Glynn got forward, on 29 minutes, to pop over his side's seventh score of the game.

Paudie Clifford made been quiet in the first half, as had Sean O'Shea. When Clifford was fouled by Kieran Molloy, though, O'Shea took the ball, curled a close-range free over and it was 0-7 apiece.

The half ended with Cillian McDaid scoring a fine point from play, Paul Conroy and Matthew Tierney breaking up a Kerry attack and Galway ending with a long spell of possession. HALF-TIME: Kerry 0-7, Galway 0-8. 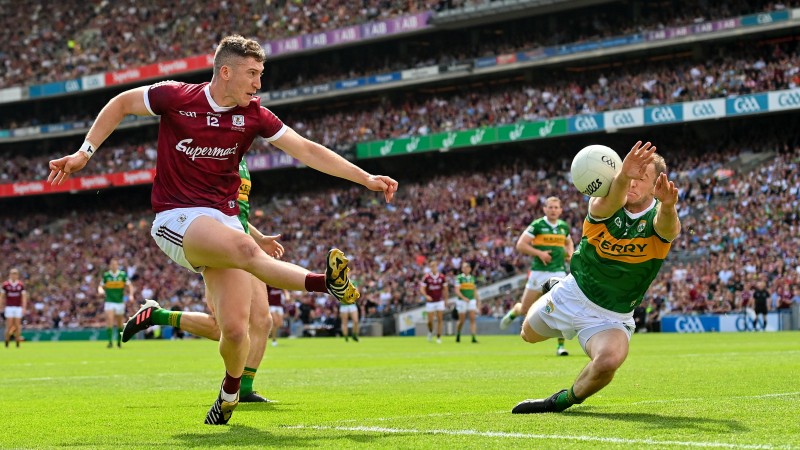 Stephen O'Brien of Kerry blocks a shot at goal by Johnny Heaney of Galway. (Photo by Ramsey Cardy/Sportsfile)

END_OF_DOCUMENT_TOKEN_TO_BE_REPLACED

The second half began with Kerry bringing on Adrian and Killian Spillane, but it was a similar theme to the first half. Shane Walsh curled over a free and David Clifford scored from play, off his right foot. Diarmuid O'Connor then scored from play and it was all square, again.

Whoever was up for a crack at marking Walsh was struggling badly. The Kilkerrin-Clonberne curled over a beautiful point, under the shadow of The Hogan Stand, but Paudie Clifford came to the party with a nice point before, on 42 minutes, brother David put his side ahead for the first time.

That lead lasted 45 seconds as McDaid showed up in attack to pop over a score. Walsh, now over at the opposite side and he tallied another lovely score, from play. Killian Spillane levelled it, but Kieran Molloy and McDaid both marauded forward to make it 0-14 to 0-12, after 47 minutes.

Conor Gleeson was fortunate to avoid a black card after rushing out of his goal to drag down Killian Spillane. He was allowed to stay on, though, and looked on as Sean O'Shea pointed a close-range free. On 51 minutes, the galloping Graham O'Sullivan appeared up-field and equalised for The Kingdom. 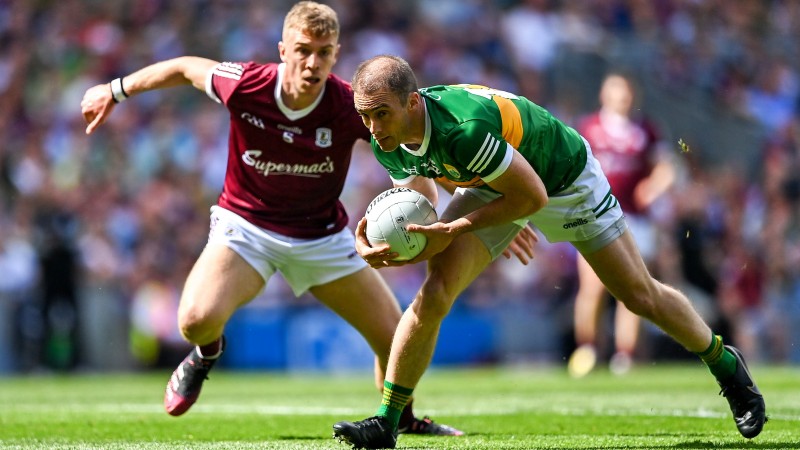 Cliffords win it for Kerry

David Clifford put Kerry in front, on 53 minutes, with another nerveless free. McDaid showed up in attack for Galway but was off-target. It was only his side's second wide of the game, at that point.

Kerry were warming to the task, and Paudie Clifford, who had earlier required treatment for a banged-up nose, pointed from play. It was 0-16 to 0-14 to Jack O'Connor's side.

On 63 minutes, after McDaid was poleaxed, Walsh put a free over the bar and it was the men from the West's first score in 13 minutes. Sure enough, Damien Comer won the Kerry kick-out and McDaid split the posts with a sumptuous score.

John Daly was penalised for a borderline grab at Killian Spillane's hand and David Clifford made it 0-17 to 0-16 with four minutes to play. Spillane - a real impact sub - fisted over a point and we then had a free awarded off a Galway kick-out.

As Galway pressed for late scores, it was Gavin White - powering forward - that popped over one that settled it for Kerry, and delivered Sam Maguire. O'Shea added the insurance point as fans in green and gold partied in the stands.

Here are our player ratings for The Kingdom and The Tribesmen.

You may also like
3 days ago
Lidl launches One Good Club in support of youth mental health
2 weeks ago
O'Byrne Cup reduced to farce as Offaly withdraw from competition
2 weeks ago
Rory Gallagher expects Glen players to be back for Derry the week after club All-Ireland final
2 weeks ago
"That fecker, again?!" - A Dubliner's perspective of going up against Lee Keegan
2 weeks ago
The top five GAA players who never won the All-Ireland
3 weeks ago
Dessie Farrell reveals why Paul Mannion and Jack McCaffrey returned to Dublin
Next Page