Rebels manager Ronan McCarthy has handed corner-back Kevin Flahive his first championship start while Matthew Taylor, Sam Ryan and Ronan O’Toole could all experience their first taste of championship football after they were named on the bench.

It's the third summer in a row the two counties will meet in the semi-final of the provincial championship and Cork will be without Sean Powter and Paul Kerrigan due to injury.

McCarthy said that it would take a while for new players to integrate into the Rebels side but that it should become less of an issue for the county as the season progresses.

"It's definitely a disadvantage," said McCarthy of his absentees.

"You'd prefer to have them. Particularly when there's a new management team as well. Let's say Galway for example, and obviously their Corofin players weren't available to them, but that's a management team that's in year four or five.

"The fact that it's my first year and our first year, we would have preferred to have them, but that's the way things fell. The other advantage is that they're playing a high level of football. 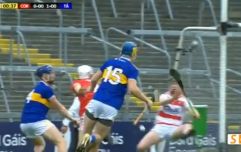 END_OF_DOCUMENT_TOKEN_TO_BE_REPLACED

"It does take a while for players to integrate into the squad and into the way we do things. The longer we go on, the less of an issue it will be."


popular
QUIZ: Identify the missing sponsors from these football jerseys
"I was like, ‘My ear is hanging off my head. Can you not see that?!'"
The SportsJOE 12 o'clock quiz | Day 307
Japanese rugby players living off the classic Irish school lunch for pre-match-meal
QUIZ: Name all 50 of these 2000s Champions League players – #4
"People that get All-Stars aren't just a cog in the wheel. These are the special, outstanding players"
Cristiano Ronaldo sets rough retirement date

You may also like
1 year ago
"It just has to stay alive" - Cork's battle to produce the goods
1 year ago
Cork physio wins hearts of the country with wild celebrations as Rebels catch fire
1 year ago
Alan Cadogan: Parts of your body is screaming, 'What the hell are you doing here?'
1 year ago
'She has such a good mind for the game' - Eimear Scally on Saoirse Noonan
1 year ago
Mark Coleman turns defender inside-out before scoring ridiculous point
2 years ago
Tony Kelly returns as Clare and Cork name teams for Páirc Uí Rinn clash
Next Page