Eglish and Tyrone footballer Conor McKenna is set to give the AFL another go as, after two years back home, the 26-year-old is on his way Down Under again.

It's the second time the county have lost the talented forward but that doesn't make it any easier. Because Tyrone's loss will certainly be Australia's gain.

Having played a starring role in Tyrone's run to the 2013 All-Ireland minor final, McKenna was noticed and he was recruited by AFL scouts. He eventually landed on Essendon, where, from 2015 to 2020, he became one of Ireland's best and most successful exports to the Aussie League.

Despite battling home-sickness throughout his stay, the speedy Tyrone star played in 79 games for the Bombers during that spell, and also scored 20 goals. His highlight reel is something special.

McKenna came back home in 2020, having threatened to for years, and it was the following year when he realised his childhood dream, winning an All-Ireland final with Tyrone. 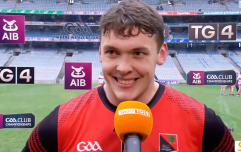 END_OF_DOCUMENT_TOKEN_TO_BE_REPLACED

He impressed throughout that season under Brian Dooher and Fergal Logan, but, just like many of his team-mates, he did seem to be suffering from a bout of 'second season syndrome' the following year, when he was sent off in two Ulster championship games.

AFL media are now reporting that Geelong, Brisbane and Port Adelaide are eyeing up the half back. A move to Geelong would certainly look like a good fit, where he would join up with fellow Irishmen Zach Tuohy and Mark O’Connor.

In his first stint, McKenna had criticised the AFL media for their coverage of him at different times but two years on, he'll be disappointed to discover that little has changed. That's because, after hearing the news of his imminent return, former Collingwood coach Nathan Buckley was quoted as saying it's a case of 'buyer beware' for him.

"They (the Irish boys) decide that they’re going to come over for a couple of years and they do get homesick and then they want to get home because they can play a professional sport over there," he said.

END_OF_DOCUMENT_TOKEN_TO_BE_REPLACED

“There is a little bit of picking and choosing that happens – it would be buyer beware for me.

“If Conor McKenna has been here and then gone home and then wants to come back out again, there’s a little bit of in and out that happens with the Irish boys.”