RTE GAA pundits Colm O'Rourke and Joe Brolly clashed over the topic of Michael Murphy and if the Donegal forward was the most influential player of this decade.

Murphy has been a lynchpin for the 2012 All-Ireland champions for the majority of this decade with Brolly asserting that he has been the best player of this decade, a statement O'Rourke likened to Nigel Farage or Boris Johnson on drugs.

O'Rourke listed off numerous examples to explain why he thought Murphy was not worthy of that tag but Brolly simply didn't have time for his argument.

.@joebrolly1993 refuses to give a prediction. Much to Colm O'Rourke's irritation. They also disagree on Michael Murphy #RTEGAA https://t.co/DsuMN9AvSi pic.twitter.com/amnHS9yZmq

O'Rourke: Joe and myself differ. Joe has put himself up as the best player of the last decade. I thought he was beginning to sound like Nigel Farage or Boris Johnson on drugs when you say things like that because if you keep saying something often enough, it doesn't necessarily mean that it's the truth...

Brolly: But it is the truth 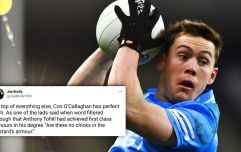 END_OF_DOCUMENT_TOKEN_TO_BE_REPLACED

O'Rourke: No because if you look..

Brolly: He brought his club from junior to senior in two seasons. All-Ireland U21 final. In two years they were the All-Ireland senior champions and he was the player of the game. The most influential Ulster player of his generation.

O'Rourke: He's not the most influential footballer of his generation because what is increasingly happening over the last five years is that he has drifted out to midfield and ended up giving and taking short hand passes. Greatness in any player must be dictated. Ulster final against Monaghan he hasn't been good. He was marked out of it by Aidan O'Mahony in an All-Ireland final.

popular
Rio Ferdinand responds to fans calling him out on terrible Scotland prediction
Southgate explains why he didn't move drinks bottles like Ronaldo and Pogba
Cristiano Ronaldo is not human. Not human at all
"Not good enough" - Roy Keane rips England a new one as Scotland keep hopes alive
ITV revisit Highbury tunnel incident, but viewers feel Keane asked wrong question
"He looks the fool now" - Didi Hamann took exception to one magic Ronaldo moment
QUIZ: Name these 50 Euro Championship goalscorers
You may also like
3 weeks ago
"What's wrong with young fellas, nowadays?" - Joe Brolly takes exception to Conor McCarthy interview
8 months ago
Joe Brolly: "I fully support the GAA's decision to pause"
1 year ago
"I'll be dealing in facts and Joe will be doing what he loves - being biased towards Dublin"
1 year ago
Seven years of Twitter debate between Joe Brolly and Colm Parkinson coming to a head next week
1 year ago
"All that for this?" - the anticlimax of winning an All-Ireland for Joe Brolly
1 year ago
"The referee must have been clearly influenced by the propaganda coming from Kerry" - Joe Brolly
Next Page