In modern-day GAA, compliments don't get much higher than that. They definitely don't. Such were the levels that Bernard Brogan reached.

END_OF_DOCUMENT_TOKEN_TO_BE_REPLACED

The four-time All Star joined Colm Parkinson for a special episode of The GAA Hour, a week after announcing his inter-county retirement, and looked back on his 14 seasons in the Dublin set-up.

"There's no way you could have imagined," said Parkinson, "when you were in your third year of being a sub for 'Pillar' (Caffrey), that you were going to be Player of the Year (in 2010) having not got into an All-Ireland final, with Dublin, and were going to win seven All-Irelands."

"Definitely not," Brogan agreed, "and you only realise all that when you look back."

Brogan retired from Dublin with a mighty impressive playing CV behind him and even if he only had fleeting match involvements in the five-in-a-row achievements, he showed steely resolve to come back from a bad injury to push the likes of Con O'Callaghan and Paul Mannion all the way for a starting jersey. 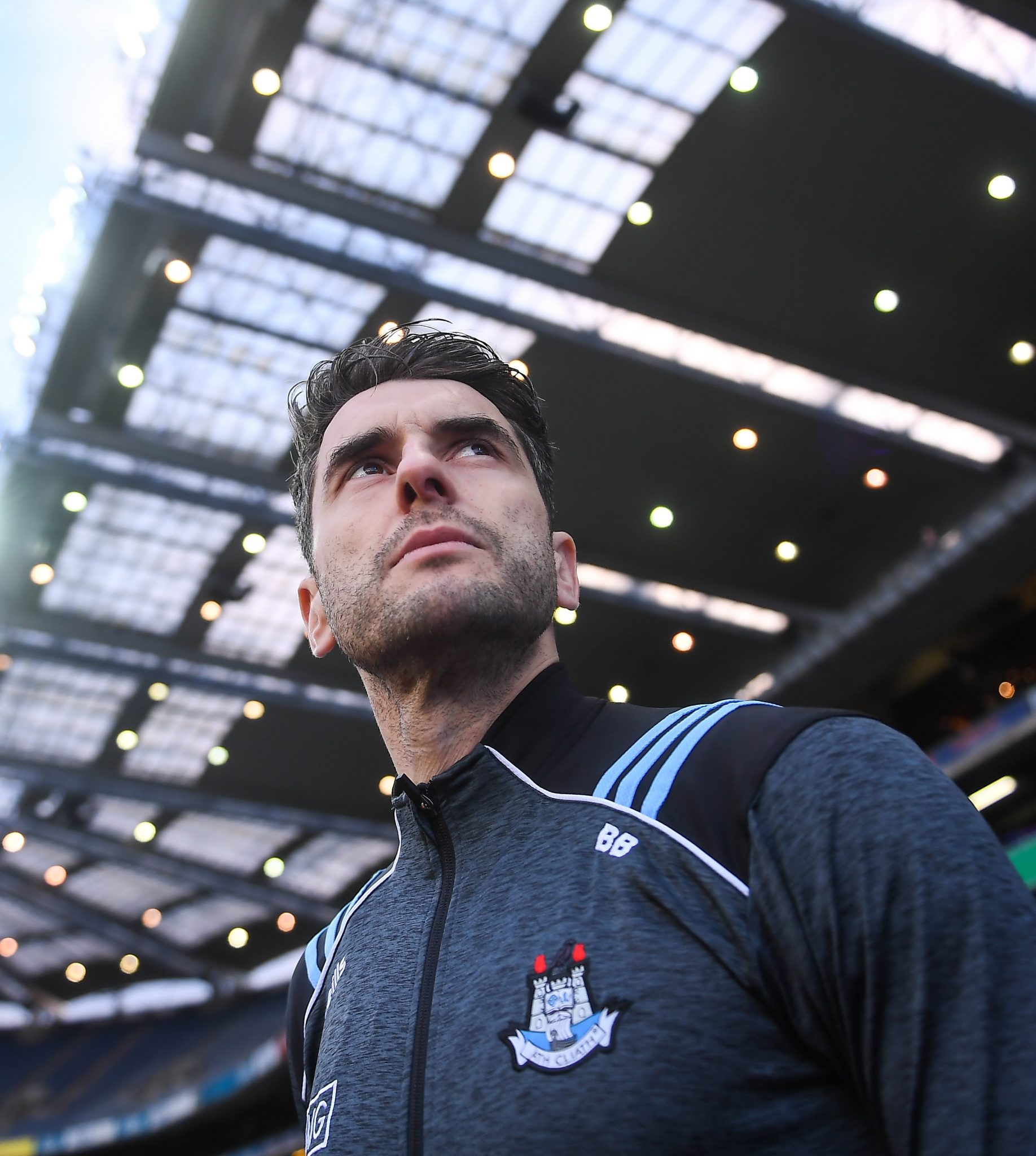 END_OF_DOCUMENT_TOKEN_TO_BE_REPLACED

During his wide-ranging chat with Parkinson, the 35-year-old touched on some of the tough periods of his inter-county career and what helped him pull through.

Having won the Footballer of the Year award in 2010, it was less than two years later that Bernard Brogan was putting himself through the wringer. He missed a one-on-one against Mayo goalkeeper David Clarke in a 2012 semi-final that Dublin would go on to lose by three points.

"I kept running that scenario through my head," says Brogan. "I didn't think I was in the moment for it. I didn't execute the skill the way I would have liked to do it.

"I suppose I would have put a lot of pressure on myself. Coming from Player of the Year then we had just won our first All-Ireland [as a squad] and there was a momentum, and I felt I let the team down.

"There was a chance, yeah, and I got what I wanted. I always felt that I could make a difference and Dave Clarke, who I was in Maynooth with and did a lot of work with. He knew my game well but... I wanted to strike it well, as I had against Laois, but the ball was low and it just caught the hand.

"I just stuck with me for some reason. I was like, 'Why didn't I bounce it and go past him?' I was through one-on-one. I had beaten Ger Cafferkey, caught the ball over the top and I had four or five yards in front of me. There's all sorts running through your head but that one stuck with me." 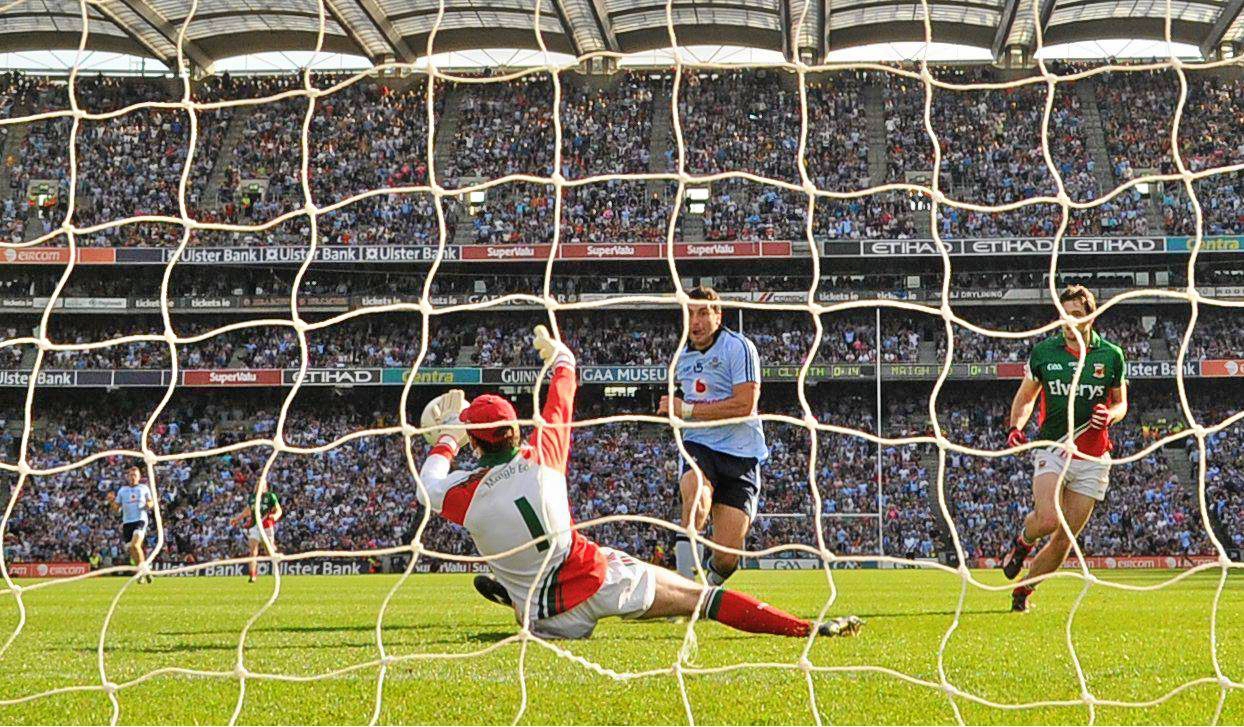 Brogan and Dublin responded from that last four exit, in 2012, by sweeping to their second All-Ireland triumph [as a collective] in 2013. Brogan scored 2-3 in the final against Mayo to right that wrong from the previous year.

There would be more heartache in 2014 and, again, Brogan was ruing a miss, or two.

"[In 2014] I missed the first free and the second one was this difficult kick on the left side, nearly out around 40 yards. And I said, 'I'm not sure if I'm going to get this'. You've no chance when you're self-talk is giving you that back.

"Kevin McManamon talks a lot about self-talk and he uses it himself. It was just that Donegal set-up and how every score counts and there's pressure on every score."

Ray Cosgrove's free miss against Armagh, in the 2002 semi defeat, flashed through his head. "He had got such a hard time for that, from The Hill, where he had scored six goals into that summer, and amazing All Star summer. And yet they carried that miss with them."

Dublin went on to lose that 2014 semi final to Donegal by six points as the champions missed a rake a chances, from frees and open play, in the final stages. Around that time, having come in as a performance coach in 2012, Bernard Dunne was having a positive impact in Dublin set-up. Brogan credits the former boxing world champion and others from the Dubs' backroom staff with helping him through that tough period.

"In the early days, I would have met him a few times out in Palmerstown and just chatted. Sometimes it's good to just go for lunch and have a chat.

"In more recent times, Gary Keegan has been in and he's a sports psychologist and a mind-set coach. He's a powerful guy. Very, very powerful. He has given me moments of clarity, through group talks or individually. Sometimes, you get out of those things what you put into them as well... They don't chance everything. They just get you to open up and maybe have a conversation."

Brogan says the likes of Keegan and Dunne were great for his mind-set but he does admit that he 'carried it' regarding those semi-final misses for several years.

Again, though, it was that hurt that helped drive him on.

Bernard Brogan scored 6-21 as Dublin won their third Sam Maguire in five championship summers. It would be the first step in the five-in-a-row journey that took the forward all the way to Croke Park on September 14.

With his sons, Keadán and Donagh, in his arms, and a sonorous Hill 16 at his back, Brogan finished up as close to a high as you can be possibly afforded in GAA.


popular
Roy Keane flatly rejects longstanding perception of ex-Man United midfielder Paul Ince
Allianz National Football League Round 1: All the action and talking points
Sean Dyche set to be named Everton manager after Marcelo Bielsa talks break down
British publication urges Gareth Southgate to claim Evan Ferguson for England
"Not cool" - Jurgen Klopp far from happy with question about late Liverpool fouls
John Egan breaks Wrexham hearts and denies Ryan Reynolds a Hollywood ending
Two Ireland stars included in Premier League's 'young English XI'
You may also like
1 week ago
QUIZ: How many of the 33 county SFC champions for 2022 can you name?
2 weeks ago
"You need to be able to hurl your way out of trouble" - Composure the key to Dunphy's game
3 weeks ago
"We'll have plenty of Christmases" - McGowan and club players should be envied not pitied
4 weeks ago
'With the worlds’ greatest thief not able to take even just one friendship away' - Cooper retires with heartfelt statement
4 weeks ago
Mickey Moran gives a rare interview in TG4's brilliant Anton O'Toole documentary
4 weeks ago
How many of the 65 county senior champions for 2022 can you name?
Next Page