"Hampsey you're the man, in the Hogan Stand, Sam is coming home again."

Tyrone natives and members of the music duo 'Two Degrees,' were sitting in a hotel after watching their county record a historic victory over Kerry in the All-Ireland semi-final.

The pair had already written a song which was a big hit during Tyrone's journey to the final in 2018, but something felt special this time, and as they started playing around with lyrics, they had no idea then that they would become a part of this season's GAA success story.

Lead singer Matthew Mullin and his partner in crime Jordan Shivers ended up getting into the winning banquet with the Tyrone team, just hours after they beat Mayo, and soon they were up singing their tune that even had Feargal Logan joining in.

"I texted Kieran McGeary, who I would know through performing at his bar, and just asked him 'When do you want us?'

"Next thing, he had sorted two tickets for us, and it was really strict to get into, there were like four points we had to get through to get into the banquet.

"I was actually taking a few pints that day so it absolutely flew, and I woke up the next day and had to ask myself, 'was I actually there last night?'

"Only Jordan was driving, we would have ended staying over, and I would have woke up beside Feargal Logan or something." 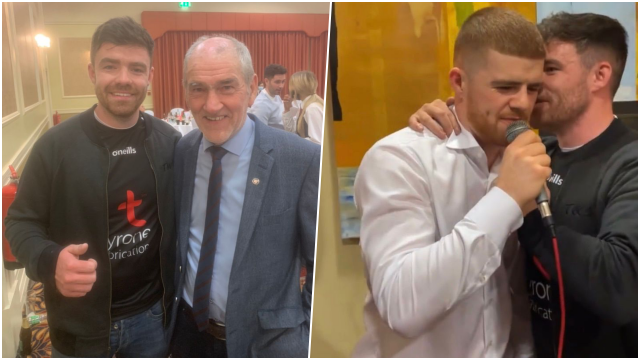 Being a Tyrone man himself, Mullin was in some good company and even managed to park himself down next to Peter Canavan and Brian Dooher.

"I was never going to pester people for photos, but these boys are civil and I wanted one for social media, so that's where the photo came about.

"Feargal and Brian did like the song, I think with all the interviews and aftermath, it hadn't got to sink in with them yet, but when we started playing the real party began, and people started to enjoy themselves.

"Feargal Logan was even singing the lyrics with his name in it."

END_OF_DOCUMENT_TOKEN_TO_BE_REPLACED

The song is written to the tune of 'Whole Again' by Atomic Kitten, and is purposely satirical, with the names of players shoe-horned into it, along with lots of phrases that only Tyrone natives would understand.

The party didn't stop there, and both Mullin and Shivers found themselves booked up, following the team around in their celebrations, even playing in form Tyrone All-Ireland winner Owen Mulligan's bar in Cookstown.

“Hampsey you’re the man,
in the Hogan Stand,
Sam is coming home again”

"My dad was the chauffeur all day Sunday, because Jordan deserves a drink. I obviously wanted to be a part of the celebrations, so da was kitted out in Two Degrees merchandise and drove us around, from Cookstown to Galbally, and back to Pomeroy again. 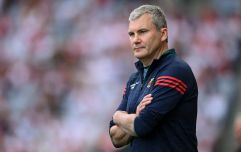 END_OF_DOCUMENT_TOKEN_TO_BE_REPLACED

"We basically just followed the team about for two nights."

When Tyrone GAA Official tweeted the photo of captain Padraig Hampsey lifting the Sam Maguire, the words they used in the tweet were the lyrics of the duo's song, and they even tagged the band in the post.

"When I got the notification, and not only Twitter, but they tagged us on Facebook as well, I was like oh my God, this song is now associated with the win, and when we look at the lyrics 'Hampsey you're the man, in the Hogan Stand,' it was just all very fitting."


popular
Paul Scholes calls a spade a spade after comeback win
It's often forgotten that Tommy Walsh began his career with the same stardom and promise as David Clifford
Derry club win county final factfile games with extravagant set of jobs
Jordan Larmour primed for a season to remind everyone how good he is
Shane Walsh: 'That's not how I was coached to play football. No one was coached to play football that way'
Paul Scholes says Paul Pogba is a "daydreamer" and Fred and McTominay are "limited footballers"
Spicy Donegal semi-final the highlight of a rip-roaring weekend of GAA on the tv