The raging hot favourites didn't have it all their own way in the Leinster intermediate hurling final against Glenealy on Saturday, but they eventually prevailed on a scoreline of 0-19 to 1-15.

The Wicklow side went into the game as rank 16/1 outsiders, but they soon showed they didn't travel to Nowlan Park to make up the numbers.

Indeed, the perennial Wicklow champions opened up a one point 0-6 to 0-5 lead after 20 minutes of the action. County legend Leighton Glynn was impressing in the attack for the Glenealy men.

Half time in Nowlan Park and St Pats,Ballragget lead Glenealy 0-9 to 0-8. Foul's on Leighton and Alan Driver and Bosco points both.

The 1/33 favourites were struggling, with two of their defenders receiving yellow cards in the first half.

Ballyragget's Kilkenny star Kevin Kelly's accuracy from placed balls was keeping them in the game. On the other side, some of the travelling Glenealy crowd weren't best pleased with some of the refereeing decisions that went against them. 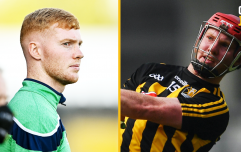 END_OF_DOCUMENT_TOKEN_TO_BE_REPLACED

Ballyragget went into the half-time interval with a one point lead, with the sides very evenly matched.

Glenealy's momentum continued into the second half. After five minutes of the action, the sides were level at 0-10 apiece.

The Wicklow outfit thundered into the game with a goal in the 40th minute to take a two point lead over the Kilkenny men.

It was tit-for-tat from there to the final whistle, with the sides going score for score down the home straight.

Kevin Kelly scored the winner from a placed ball with virtually the last puck of the game.

Glenealy will be heartbroken to lose it in such circumstances, but the 16/1 outsiders can be proud of their efforts.

Elsewhere, Anthony Nash's Kanturk had no such problems in Kilburn Gaels in London. The Cork side eventually won out on a scoreline of 2-18 to 2-8.

Aiden Walsh impressed for the Rebel outfit, as did their nippy corner forward Liam O'Keeffe. They now advance to the semi-final of the intermediate competition to play Middletown of Armagh.


popular
"I remember someone saying, 'This guy's the best of the lot of them. Just wait for him'" - Brian O'Driscoll
"I trained with a guy that was born in 2004 the other day. We reckoned Earlsie could be his father!" - Peter O'Mahony
Nigel Owens on most annoying players to referee (three of them are Irish)
The story of the GAA's greatest ever minor
Six All Blacks but no Ireland players in world's top 20 list headed by Antoine Dupont
Longford GAA movie explores the tale so many young footballers can relate to
What is the story with Tyrone clubs' woeful record in the Ulster championship?