"He almost burned out. He was on the go for two years, people were doubting him"

Jamesie O'Connor had seen this coming.

In conversation with the Clare legend last month, he let us know that Tony Kelly was on the move. Teaching alongside the Ballyea man in St Flannan's, Jamesie could see first hand the mindset and indeed the work the 2013 Hurler of the Year was putting into his game.

"He’s delivered for his club so consistently and if Clare are to be successful this year, Tony Kelly is going to have to play well," said Jamesie prior to the Limerick game.

"But I know Tony Kelly had a lot of work done earlier in the year, he was really intent on stepping up this year and really proving himself. Last year, he’ll say himself that he didn’t hit the heights that he wanted to but he seemed to be working really hard over the winter, into the spring, and he was hurling well for Clare so hopefully now we’ll see the best of him, because we will need to..."

That they have. It's hardly healthy that the Banner have been so reliant on their star turn but when a man is so clearly on fire, averaging 0-16 per game, it would be foolish not to send every ball his way.

Tony Kelly doesn't have a bad side, he has a second one 🔥pic.twitter.com/oKnHc0s6R1

In recent days, a lot of people have gone on as if we haven't seen Tony Kelly at all since 2013, as if he was a man in hiding. But a man in hiding wouldn't lead his club to an All-Ireland final and to another county title again two years later.

The expectations surrounding a 19-year-old Hurler of the Year were never really going to be exceeded, but he did inspire Clare to a League title in 2016, and an All-Ireland semi-final in 2018. Won two Fitzgibbon Cups with UL in 2016 and 2018. 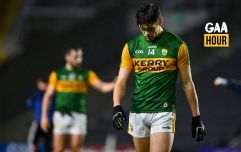 END_OF_DOCUMENT_TOKEN_TO_BE_REPLACED

Yes, Clare have flattered to deceive and while Tony Kelly will admit himself that he wasn't on top form every day, he was still one of their most consistent players, and a player who offered flashes of breath-taking brilliance that you just wouldn't see from others.

The only difference this year really is the incredible consistency he has brought to boot.

On Monday's GAA Hour, Damien Hayes reasoned that the extensive club-runs with Ballyea and indeed the college hurling with UL, may have taken their toll on Kelly in recent times.

"Kelly was under a bit of pressure. I've been saying it for years that he's been a phenomenal hurler, he's been one of the best in the country. He's been in unbelievable form with Ballyea and I suppose, Ballyea going all the way to the club All-Ireland, that year, he almost got a burn-out. He was on the go for two years, people were doubting him but the performances that he's putting in this year are incredible. He's the first name on the All-Star team, he has it nailed."

"His goal was incredible. On his way to the goals, he caught the ball and he brought his left hand into his chest and he took four or five of the longest strides to get into full motion and then he put it into the bottom corner of the net. That was it. Game over."

Eoin Larkin was just as effusive in his praise.

"It's unbelievable watching him play. It doesn't say a lot for the Clare team that he's getting three quarters of their scores, but it's freakish what he's doing and if they get to a semi-final, he could be the Hurler of the Year as-well."

You can listen to The GAA Hour discussion with Colm Parkinson, Eoin Larkin and Damien Hayes here.


popular
Rory O'Connor gets Wexford out of jail as Shanagher throws it back
Alisson gives moving post-match interview after scoring late winner for Liverpool
QUIZ: Can you name these La Liga cult heroes?
Conor McGregor sends message to new UFC lightweight champion
Burnley report Leeds' Ezgjan Alioski over gesture made towards Dwight McNeil
'Stop, stop, STOP!' - Texas crowd left stunned as UFC legend has arm snapped
QUIZ: We give you the year, you tell us the FA Cup winner

You may also like
2 days ago
"There's a lot of potential in that team if they get away from the counter-attack football" - Why Tyrone are so interesting this season
3 days ago
"In hurling, the system really works. The Leagues are structured well and so are the championships"
3 days ago
It took a brilliant piece of management from Pat Gilroy to turn over Connolly's 2011 final suspension
6 days ago
"He did a great impression of not caring where the ball was" - Casey's movement a sight to behold
1 week ago
"I don't feel we have the hurlers for this short-game, or ever did" - Ryan says Dublin best served going back to basics
1 month ago
"These guys didn't even know what deodorant was" - How Meath's 'savages' prepared for Flynn for toughest challenge of his life
Next Page