With Dublin boasting a one goal advantage thanks to a Sinead Aherne penalty, O'Sullivan picked up the ball just outside the square after a botched Dublin clearance and calmly curved the ball over the head of Jacks goalkeeper Ciara Trant and into the back of the net.

Cork score a goal after a mix up in the Dublin defence. Áine O'Sullivan with a clinical finish!@LadiesFootball ar @TG4TV #ProperFan pic.twitter.com/MFY5xVQNir 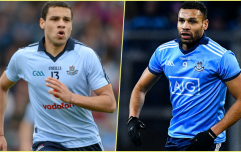 END_OF_DOCUMENT_TOKEN_TO_BE_REPLACED

Trant was standing by her near post by the time O'Sullivan picked up the ball but nevertheless it's a fantastic finish from the Beara forward.

O'Sullivan's goal brought Cork right back into the game but it didn't take long for the Dubs to restore their advantage as Carla Rowe sidestepped her marker before burying the ball past Martina O’Brien and into the back of the net.

A second goal for Dublin after Noelle Healy scampers through the Cork defence to allow Carla Rowe to score@LadiesFootball ar @TG4TV #ProperFan pic.twitter.com/vvZSCJPmTN

Early scores from Orla Finn and O'Sullivan in the second-half helped Cork cut the deficit back to two points before Rowe hammered home another goal as Dublin look poised to defend their title.

You may also like
1 day ago
Dessie Farrell set to cut large chunk of Dublin players as panel is reduced for league campaign
3 days ago
Six GAA games shown on TV this weekend that you do not want to miss
6 days ago
Dublin defeat lively Laois in O'Byrne Cup final, despite John Small's controversial red card
1 week ago
"He was told he would be going up against Sean Cavanagh, and he said: 'Who?'"
1 week ago
"It is going down the soccer route" - Laois manager Billy Sheehan doesn't agree with penalty shootouts in Gaelic football
1 week ago
Pat Spillane Junior will play county football this season, but not for Kerry
Next Page