Graham Geraghty is one of the country’s most notorious footballers of the modern era.

A man that was never far from the headlines, both on and off the pitch.

He is under the spotlight tonight in the latest episode of the fantastic Laochra Gael series on TG4.

Geraghty kicked his last ball for Meath seven years ago after he made a surprise return from retirement, but he is back in the headlines with this new documentary.

The Laochra Gael program will showcase the life of Geraghty and delve into some of the topics that lit up his playing career including the racial remark he made to an Australian player during the 1999 International Rules series as well as his complicated relationship with the Dublin supporters who mocked him on Hill 16.

Geraghty was one of the few footballers to adapt a larger than life persona and engage with the media on a regular basis. 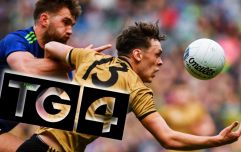 END_OF_DOCUMENT_TOKEN_TO_BE_REPLACED

He was never far from controversy during his playing career, while off the pitch, he has tried his hand in politics and business that makes this documentary a must see.

The preview that TG4 released gives you a great taste of what’s to come in the program. “Graham Geraghty was the epitome of the modern footballer: highly talented, unorthodox, and photo friendly.”

Geraghty is set to talk about the infamous Meath v Mayo brawl of 1996 while the documentary is set to answer questions about him and give viewers an insight into some of the most controversial events of his career. It will air at 9:30pm tonight on TG4.


popular
In 86 seconds, Patrick Bamford becomes English football's voice of reason
'Make him hurt, make him yours' - How the Springboks ruled the world
Springboks legend Tendai Mtawawira tells us what he really thinks of Ellis Genge
Jose Mourinho is the picture of happiness and health after Spurs sacking
'Beast' Mtawawira is a big fan of Mike Ross' Lions front row
"We did find him hours later and we made up." - How Flynn and his best friend came to blows in Croke Park
Ugo Monye's revised Lions XV dominated by Welsh and Irish
You may also like
1 year ago
Superb TG4 documentary offers insight to lives of up-and-coming rugby players
2 years ago
Women's World Cup coming to free-to-air Irish TV this summer
2 years ago
TG4 name their team of the National League season
2 years ago
Jump Girls, a TG4 documentary not to be missed
2 years ago
Bumper weekend of sport on TG4 with eight hours of uninterrupted GAA
2 years ago
TG4 have tonnes of All-Ireland pedigree on show this weekend
Next Page