Will St Conleth's Park still be a 'suitable ground' if Kildare advance to the Super 8s?

Kildare advanced to the final round of the All-Ireland qualifiers with a two-point win over Mayo in Newbridge on Saturday.

The match attracted significant attention in the build up for the GAA's decision to originally schedule the game as part of a double header with Tyrone and Cavan at Croke Park, before insisting that the game would be played at headquarters, and then later relocating the match to Newbridge, after Kildare's rightful insistence that they should be awarded home advantage after they were the first team drawn in the GAA's All-Ireland qualifier draw.

Rule 6.28 (2) of the GAA rulebook states that “home venues shall be used in Rounds 1, 2 and 3 of the All-Ireland qualifier series with the first team drawn having home advantage” but Rule 3.27 declares that the CCCC is given responsibility “for competition scheduling and arrangements for and control of games (excluding appointment of referees) under the jurisdiction of the Central Council.”

The GAA’s Central Competitions Control Committee (CCCC) decided that the capacity at St Conleth’s Park in Newbridge was not suitable for “health and safety” reasons.

"The GAA wishes to point out that the decision by the CCCC [Central Competitions Control Committee] to fix the game for Croke Park originally was based on serious concerns around the health and safety of patrons attending the fixture," the Association said in a statement.

"The CCCC has received assurances that these issues will be adequately addressed."

This summer will see the introduction of the Super 8 series where the four provincial champions and the four winning teams from round four of the All-Ireland qualifiers play three games each in two groups of four teams during the months of July and August.

Each group consists of two provincial champions and the two losing finalists of the other two provinces or the team that beats them in round four of the qualifiers.

The two provincial champions meet and the two qualifiers meet in Croke Park in the first round. In phase two the round four qualifier teams have home advantage and the provincial winners are at home in phase three. Dublin, if they qualify, will also play their home game at Croke Park.

However, for example, if Kildare draw Cork in the final round of qualifiers on Monday, and they win, they will then be drawn into the same group as defending All-Ireland champions Dublin and could theoretically then face the Jacks at Newbridge. 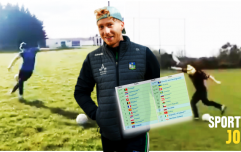 END_OF_DOCUMENT_TOKEN_TO_BE_REPLACED

Home venues for the Super 8 series shall be subject to approval by the Central Competitions Control Committee and shall meet the criteria set down by the National Facilities/Health and Safety Committee.

Under the GAA Official Guide r3.47 (a), the Central Competitions Control Committee has overall responsibility for Competition Scheduling and Arrangements for and Control of Games under the jurisdiction of the Central Council.

An Garda Siochana stated that they were content with the level of safety surrounding St Conleth's Park for Kildare's qualifier with Mayo but GAA Director of Communications Alan Milton said that they will have to discuss the suitability of certain grounds for the quarter-final series.

“Look, if Kildare do make it to the quarter-final stage, that’s an issue to be discussed then,” Milton told The Irish Times.

“It’s possible that in the close season there will be more conversation around future championships, for example in Leinster – if the county doesn’t have a venue of 15,000, there are certain games they can’t host.”

If grounds are not suitable, the county board can nominate an alternative venue as Cavan did with Brewster Park while their home ground of Breffni Park is under development, however, the Kildare county board refused to nominate an alternative venue for their  round three qualifier which has the potential to recreate last week's scheduling conflict should the lilywhites progress to the Super 8s.


popular
Jose Mourinho is the picture of happiness and health after Spurs sacking
'Make him hurt, make him yours' - How the Springboks ruled the world
In 86 seconds, Patrick Bamford becomes English football's voice of reason
Springboks legend Tendai Mtawawira tells us what he really thinks of Ellis Genge
'Beast' Mtawawira is a big fan of Mike Ross' Lions front row
Jose Mourinho is about to step up and become the hero football needs
"We did find him hours later and we made up." - How Flynn and his best friend came to blows in Croke Park
You may also like
1 week ago
"Twas often I felt like firing a boot at him' - Micko's words of consolation didn't go down well in Cork
1 week ago
How a life on the farm inspired one of the greatest ladies GAA players of all-time
1 month ago
"I got woeful abuse on Twitter after the All-Ireland final that year" - game-changer still going his own way
1 month ago
Gaule honoured as camogie player of the year for a second time
4 months ago
"It was a dream to represent Cork" - Nash pulls curtain on memorable career
4 months ago
O'Riordan's prodigious journey deserved this Holy Sunday
Next Page