Bet he was boiling in that outfit...

The Football League season began today, and with it a few new names. West Brom played their first game in the second flight for eight years after a toothless relegation from the Premier League last season.

The Baggies lost to Bolton 2-1 thanks to an 89th minute goal from Bolton substitute Yanic Wildschut, but incredibly that was not the most surprising part of the game.

No, that came on the touchline, in the form of West Brom's new mascot, who is a boiler. Yeah, the thing that heats the water in your house. A big, white, square boiler.

Show me a better mascot than West Brom's Boiler Man and I'll show you a liar. pic.twitter.com/liNGzcJjGb 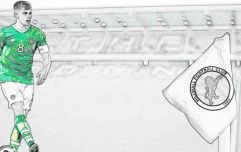 END_OF_DOCUMENT_TOKEN_TO_BE_REPLACED

Usually, mascots come in the form of people in animal costumes. Pete and Alice the Eagles at Crystal Palace, for example. Fred the Red. Gunnersaurus. There's a generic formula and it works. But West Brom decided to shake things up this season and have a household appliance cheering them on from the side of the pitch.

There is a reason behind this, obviously, though it remains really fucking weird. West Brom's new prinipal sponsor is Ideal Boilers and as part of the deal, the Baggies appear to have agreed to advertise the company's product on a matchday by dressing someone up as a boiler.

The poor soul who was stuck in the outfit this afternoon did make the most of his chance to entertain the fans. Somebody had to, etc. etc.


popular
James Haskell on text exchange with Peter O'Mahony after Ireland's victory over Scotland
The SportsJOE 12 o'clock quiz | Day 103
Fines and suspensions in Tipperary after stewards enquiry
"The academy boys have turned into small monsters over the past few weeks" - Peter O'Mahony
Can you name the first clubs these players went to after leaving Celtic?
SportsJOE 2000s Football Quiz | Round 8
"I have more work done than any player in Ireland" - The Trevor Giles tribute show
You may also like
11 months ago
10 under the radar transfers you might have missed this summer
1 year ago
Norwich City fans living it up with cheaper tickets on the way
1 year ago
Jack Grealish cut his head open during trophy lift
1 year ago
Why Jack Grealish's decided to play in pair a of worn out boots
1 year ago
Dean Smith opens up on his father's illness in post-match interview
1 year ago
Paul McGrath full of praise for that man Richard Keogh
Next Page