Wes Hoolahan is forever destined to be a super-sub

For all his talent Wes Hoolahan struggles to get into a starting XI.

The Trapatonni era proved that and even under Martin O'Neill the Norwich player has struggled to consistently start for Ireland.

Well, the same can now be said for Norwich, where he has been playing since 2008. 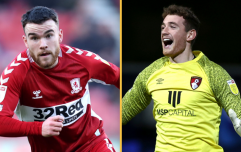 END_OF_DOCUMENT_TOKEN_TO_BE_REPLACED

The Canaries have a new manager at the helm, Daniel Farke, he previously managed Borussia Dortmund II.

He's preparing for the upcoming season with Norwich facing Fulham on Saturday and admitted that 35-year-old Hoolahan's playing time will be limited.

DF: "Wes Hoolahan is a little further on. He can't play 90 minutes but is in the squad. He can be an option from the bench." #ncfc

In fairness to Farke, Hoolahan is now in the latter stages of his career and at his age may not be able to deliver for 90 minutes week in week out.


popular
Kilmacud Crokes to counter Glen's objection over extra players in All-Ireland final
"He's a serious specimen, 6 ft 3 as well, so he's an incredible athlete" - Geaney hails O'Connor's impact
January transfer window 2023: Follow the latest updates live in our hub
"He didn't give me that jersey back!" - Johnny Sexton on new rival Jack Crowley
Roy Keane's threat to Cesc Fabregas about 'pizza incident' has panel in stitches
The two toughest calls in Ireland team to face Wales are in the backline
Laura Woods savages Twitter user after he asks her to come over while his wife is at work
You may also like
1 year ago
"What a hero!" - Wes Hoolahan at it again as Newcastle dumped out of FA Cup
3 years ago
Wes Hoolahan to train with League Two club
4 years ago
Wes Hoolahan set to sign contract extension with West Brom
4 years ago
Wes Hoolahan has really made the right call and could be heading back to the Premier League
4 years ago
Wes Hoolahan completes return to the Championship
4 years ago
Wes Hoolahan training with Championship club ahead of potential move
Next Page