The fact that a distinction is being made between the levels of physical contact in rugby and in the GAA, is guaranteed to raise eye-brows.

Scrums, rucks and mauls. Lingo associated with the oval ball, but if you listen close enough to Michael Duignan or to Darragh Maloney on a summer Sunday, you'll be left in no doubt that hurling and Gaelic football are contact sports too. And the same goes for soccer.

Now this 'contact' may not be as full on or as common as what you might expect to see in a Champions Cup game between two heaving packs, all brawn and shoulders, but try telling Daithi Burke to maintain his social distance if TJ Reid fumbles a sliotar in July.

Wouldn't want to be that messenger boy. But maybe there is a chink of light.

An Taoiseach Leo Varadkar revealed a five stage plan on Friday night, detailing how something close to normality is going to re-convene in this country in the next few months and from a sporting perspective, the guidelines are heartening and optimistic.

All going well, GAA will be good to go on July 20, according to the doc. For a country who has over the last few weeks, acquainted itself with the idea that there may be no GAA at all this year, this is quite the leap but let's not forget, this date is almost three months away. Three months is a long-time and in a world full of people rushing to register their dooms-day predictions, it's important not to get too bogged down in the negativity.

Of course, these guidelines run the risk of being ripped up if a spike in infections arises and in this land of uncertainty, nobody really knows if that will occur. But the Taoiseach has literally told us that this is an optimistic plan, the best case scenario, and with countries like New-Zealand already claiming to have their worst days of the virus behind them, there is some hope down the line.

"As a country, we can only move from one phase to the next if the virus stays under control between each phase," read the Irish government's doc. 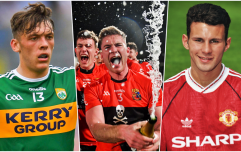 END_OF_DOCUMENT_TOKEN_TO_BE_REPLACED

Another matter entirely is whether an inter-county championship could go ahead behind closed doors, in accordance with attendance restrictions etc. and that will surely be discussed in weeks to come. But for now, let's focus on the brass tacks. A Junior B hurling game in Tipperary would go down a treat nowadays.

And while many are reading into the 'partial contact' line a little too much, one thing's for certain and that's that the outlook is going to be different in 80 days time. Whether that's for better or for worse is 50:50.

We'll take the glass half full.

Golf courses and tennis clubs re-open, for leisure rather than competition. Pitches and grounds re-open. Training in small groups of less than four people with no physical contact.

Rugby is back. Gyms, sports clubs. Matches with attendances in accordance with restrictions (less than 5000)