He doesn't understand the concept of being bettered and his DNA doesn't allow him to see how anyone could let another man beat them twice.

Coleman isn't perfect. He's sold himself once or twice in this tournament, he's lost the ball, he's lost his marker but it is that awareness he has that nears him closer to perfection every time.

Against France, on the biggest stage, he was striving for perfection again.

He was hitting blue shirts with respect only for his own country of birth. He was chasing back after loose balls with pace and vigour, getting his body in the way time and again and carrying the thing to safety with no relent. 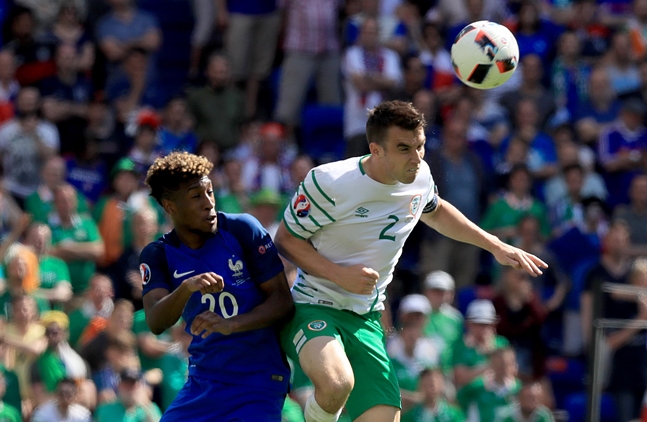 He got rolled by Payet once. He fouled him. It wouldn't happen again. The next time the West Ham player tried it, Coleman emptied him.

He patrolled the Lyon pitch like a general obsessing over whether his troops were carrying out their duties. Like a general addicted to leading by example and the thrill of putting his own neck on the line before risking any other man's.

The Donegal native seems to be hooked on this game, on his own game. It looks to be an almost unhealthy high that he's searching for, that pursuit of perfection. It's like he won't stop until he finds it.

McCarthy is f**king on it tonight

Seamus Coleman is making damned sure of itpic.twitter.com/Vsy5SfTPYd

That's why he doesn't take any solace from the perception that Ireland can be proud of themselves. He doesn't take heart from a gallant effort or from any kind of nearly story. He doesn't even care if France are a good team.

"Ack, they're a top side with top players but we had total belief that we could get something from that game," he wore the arm band and he didn't take it as a procession, he took it as open fire.

"We felt like the game was there for us after the first half. Unfortunately France came on strong and we couldn't see it out. The way we started in the first half, I thought we were brilliant but their quality probably came through a bit in the end."

For Coleman, he wasn't playing a special occasion. He was playing for his country, that's occasion enough and it didn't matter if it was the host nation or a European championship second round or whatever, it was a game of football that was there to be won. 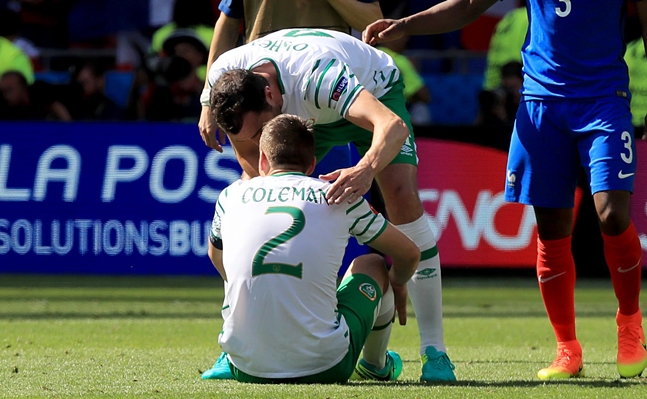 He always believes that they're there to be won.

"I don't really like that cliche, getting a goal so early. You'd take a goal any time you can get and, to be honest, I thought we played well for the rest of that first half," he said with almost dissatisfaction that the French weren't put away. "It's just the second half unfortunately, they came at us a bit more and we found it hard. They probably had a bit more freshness in the legs.

"We were 1-0 up and we wanted to see it out. We probably could've went 2-0 up. We had a chance, I think Lloris tipped it away from Longy's foot.

"They're a top team and I suppose the extra few days might've helped them because they came at us a little bit more and they seemed to have a little bit more in the legs which is diasppointing. We're disappointed with ourselves because we really thought we could get something from it."

Coleman is 27 now. There's talk of him moving on, moving up, taking the next step to establishing himself as one of the best in the world. In all that, one thing is for sure. He'll be leading his country through the World Cup qualifiers.

He'll be captaining them in the next European campaign too and, God willing, even beyond that.

"It's an honour, it's a privilige to captain your country. It's something I really enjoy doing but it would've been all the better if we could've got the win out there tonight.

"The fans are different class. We just want to thank the fans for how good they've been in this tournament. I'm not surprised really. They're amazing and hopefully we've made them proud in some way."


popular
"The support of the people means a lot to me" - Conor McGregor
"I probably should, but I don't think I will" - Cerrone vows to stand and scrap
Bundee and CJ far from their best but Andy Farrell keeps faith
"You don't want to change a winning formula" - Maher and McCormack the key for Borris-Ileigh
"I'm up in UCD so I could just go out with a few balls by myself and practice it"
The only man who can stop Liverpool is back to haunt them
Inside Shane Ross' diary: the wrong man in the wrong job
You may also like
2 weeks ago
Republic of Ireland team of the decade
3 weeks ago
Can you name the 50 Irish players to score 5 or more Premier League goals?
1 month ago
Kenny plays down half-time speech as Sweden stunned by Irish comeback
1 month ago
'I don't see what Jeff Hendrick did that Jack Byrne couldn't have'
1 month ago
Mick McCarthy and the value of players who do as they're told
1 month ago
Expect Ireland to make just one change for Euro 2020 playoffs
Next Page