"Can we criticise him? Of course we can" - Roy Keane and Ian Wright don't spare Cristiano Ronaldo

Manchester United were will wake up tomorrow and ask how they did not his six or seven against Middlesbrough. Cristiano Ronaldo could well have had a hat-trick.

Ralf Rangnick's side were profligate in front of goal and ended up paying the price with a sudden death penalty shoot-out loss to Boro.

END_OF_DOCUMENT_TOKEN_TO_BE_REPLACED

United had already went close through Jadon Sancho and Marcus Rashford when Paul Pogba was felled in the Boro box. Ronaldo stepped up as he sought his 15th goal of the season.

Facing goalkeeper from 12 yards out, Ronaldo was aiming for the bottom left-hand corner. With Lumley guessing the right way, Ronaldo may have pushed the kick a tad. It was enough for the ball to fly wide of the post, giving Middlesbrough a reprieve.

Ronaldo screamed in frustration as Pogba ran up to buck him up. United did not have to wait long, though, for the opener as Sancho fired past Lumley after being set up by Bruno Fernandes.

1-0 to United at the break and both Roy Keane and Ian Wright, up in the ITV studio, praised the hosts for creating a slew of chances. On the penalty miss, though, Keane said:

"The Middlesbrough defence are not used to this, week-in, week-out. This speed. Obviously the biggest shock is Ronaldo.

"Can we criticise him? Of course we can. He's got to hit the target. Wrighty will obviously be more critical than me."

END_OF_DOCUMENT_TOKEN_TO_BE_REPLACED

"It's one," said Wright, "you're not expecting Ronaldo to miss the whole target. I think he is trying to be very precise with it, especially with the way this goalie started, very nervously. You just want to get that on target, to save it. That was a massive shock." 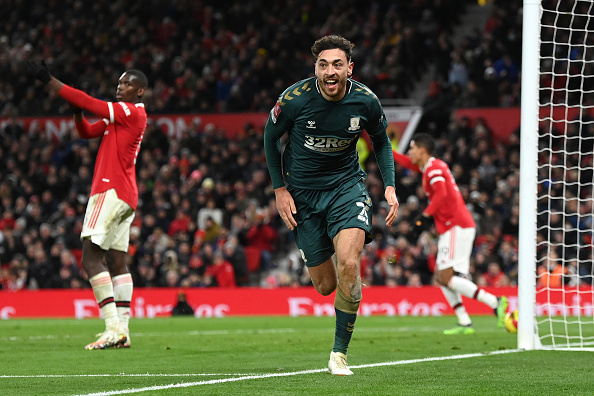 END_OF_DOCUMENT_TOKEN_TO_BE_REPLACED

United had several chances to put the game to bed in the second half, but were wasteful again.

Ronaldo had a couple of half chances, Rashford drew saves from Lumley and Fernandes hit the post when presented with an open goal.

As often tends to happen when a team are offered multiple lifelines, Boro took when when Duncan Watmore's handball in the lead up to a Matt Crooks equaliser was deemed accidental.

"United will be kicking themselves<" Keane commented during the brief pause for the change-around in extra time, after the game finished 1-1 after 90 minutes. Fernandes' open goal miss came up twice as Keane added, "They have to find a way to win this match... win it ugly; whatever."

The game ended up going to penalties, with the best of the extra time chances falling to Phil Jones and Irish forward Aaron Connolly.

The shoot-out saw 15 penalties scored in a row, but Anthony Elanga blazed over and Boro won 8-7 to march on to the 5th round of the cup.

Earlier in the night, Keane spoke about reports linking him with the Sunderland managerial job. More may become apparent on that soon. If this is his last punditry gig for a while, he had lots to get stuck into.


popular
Ireland set for 82,000-seat World Cup opener as Arsenal reject huge Katie McCabe bid
"Every team did it!" - Paul O'Connell on Roy Keane comment to Ronan O'Gara that he couldn't deny
Owen Farrell praises Johnny Sexton in revealing interview ahead of Six Nations
Everton release brutal 59-word statement to confirm Anthony Gordon departure
"It's crazy to think Bundee Aki might come straight in and start against Wales"
Shane Lowry confirms amicable split from caddie after four and a half year partnership
Two Ireland stars included in Premier League's 'young English XI'
You may also like
3 days ago
Roy Keane flatly rejects longstanding perception of ex-Man United midfielder Paul Ince
5 days ago
Roy Keane on Man United's two most improved players since Ronaldo left
5 days ago
Roy Keane on how Lisandro Martinez is a step above 'modern defenders'
1 week ago
Troy Deeney says Harry Maguire's agent contacted him after comments about the player
1 week ago
Cristiano Ronaldo told Jorge Mendes they were 'done' if he failed to find big transfer
1 week ago
Quiz: Name the Argentina players to have scored for Man United in the Premier League
Next Page