Just why are Brazilians so good at football?

Brought to you by Snickers.

When you think of the beautiful game, it’s hard not to picture that distinctive yellow and green jersey. And we don’t mean the Donegal GAA jersey.

END_OF_DOCUMENT_TOKEN_TO_BE_REPLACED

Brazilian teams were traditionally a benchmark for how football should be played. They gave us the greatest footballer of all time in Pele. And his 1970 World Cup winning team is arguably the best World Cup team of all time.

Sublime footballers like Socrates, Zico, Romario, Ronaldo, Ronaldinho, Rivaldo and Neymar are a testament to Brazil’s famous conveyor belt of talent. They’ve won the World Cup more times than any other nation and they’re the only team to have played in every World Cup tournament.

So why are Brazilians so good at football? We looked at some of the popular theories that are out there.

It’s a big place with a lot of people 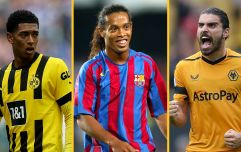 END_OF_DOCUMENT_TOKEN_TO_BE_REPLACED

It’s possible that it’s just a numbers game. Brazil has one of the biggest populations in the world. Only China, India, USA and Indonesia have larger populations but football is a religion in Brazil.

So you’ve got a perfect breeding ground for footballers among a large passionate population. Maybe the odds of unearthing a genius are greatly reduced when you’ve so many players trying to emulate a pantheon of footballing idols. 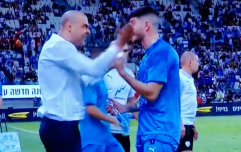 END_OF_DOCUMENT_TOKEN_TO_BE_REPLACED

Futsal is huge in Brazil. Smaller pitches, five-a-side teams and heavier balls place the emphasis on close control, skill and use of space. “Futsal makes you think fast and play fast," Pele said. “It makes everything easier when you later switch to football.”

It’s a culture of football that’s a world away from lumping the ball up to the big man. It rewards dribbling, flair and explosive movement and embraces the creative footballing spirit that the Brazilians call ginga, or “sway.”

Brazil’s combination of heat and torrential rain isn’t conducive to grass pitches so the only place you’ll find them is in major stadiums. Pele himself played barefoot on the streets with a sock stuffed with paper. It’s a different breed of football that’s played on the uneven concrete streets in Brazil.

Giving out gold stars for participation is all very well but Brazilian footballers are forged in the white hot heat of competition. This starts out with competition in the streets. For many, football represents a way out of poverty or the favelas.

Talented players have to fight each other to get the attention of clubs – no mean feat in a country teeming with talented young players. This competitive drive continues into Brazil’s fierce club rivalries and combative derbies like the Fla-Flu, the Paulista, the Grenal or the Derby of Millions. Big money moves to foreign clubs rely on a player standing out from the talented crowd.

Brazil’s international team always has to contend with traditional rivals, Argentina and Uruguay, and go into games knowing that everyone wants to claim their scalp. The Samba Boys may be synonymous with skills and beautiful football but it’s easy to forget the competitive culture that they come from. Whether they’re plying their trade in Europe, China or South America, you can bet that they had to work their ass off to get there.

You can’t underestimate the importance of coming from a tradition of winning. Success inevitably breeds success. Brazilians grow up watching superstars wear the jersey and expectations are always high.

The fans expect their team to win and to look good doing it. Parking the bus in Brazil is the closest thing you can get to footballing treason. The entire nation is invested in this culture of winning but also in being the best that they can be. Perhaps that's what sets them apart.

It’s hard to definitively say what makes Brazil so good at football. It’s probably a combination of all the above factors and a dash of the secret Samba sauce that keeps producing successive generations of great footballers. Perhaps the only way to know for sure is to ask Pele himself, which you could do if you win Snickers’ competition to meet and train with the legend.

All you have to do is take a photo or video of you channelling your inner Pele and send it to Snickers. Simply send your entries via the Snickers Ireland Facebook or their Twitter.

Play like Pele and win! Send a photo or video of you recreating one of Pele’s iconic kicks and you could score yourself a trip to Barcelona to train with the legend himself. See the Snickers Facebook page for more information. T&C’s apply.

Brought to you by Snickers.