Hard to believe it's 10 years since the death of one of the talented footballers ever to emerge from this island.

The name George Best is enough to recall grainy images of a genius swiveling one way and then another as he turned defences inside out.

Best is, and always will be, most associated with Manchester United and his genius is a reminder of the club's glory days from the late 1960s through to the '70s. 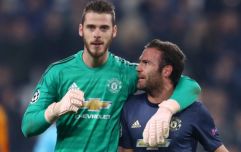 END_OF_DOCUMENT_TOKEN_TO_BE_REPLACED

And it may be almost fifty years since his long haired glorydays with the club, but at least one current squad member is still entranced by the Northern Irishman.

Best's 10th anniversary takes place tomorrow and ahead of the significant milestone, Juan Mata has paid tribute to the Belfast man

"This coming Wednesday marks the tenth anniversary of the death of the legendary George Best. Precisely, yesterday I watched a documentary about his life and football career. He was one of the best players of Manchester United and one of the best in the history of football, no doubt, and also an idol for several generations that still remember him today. A genius forever."


popular
From Canada to Carlow in the name of hurling: Nicolas Redmond's journey to the Fitzgibbon Cup
Kerry's captain selection for 2022 sums up the problem with their outdated system
"It must be difficult to say no, having won a game and heading back together"
Eddie Jones shares great tale on hour-long chat with 'inspirational' Roy Keane
Chelsea forced to change Stamford Bridge changing room after Liverpool complaint
Jesse Lingard 'angered by lack of respect' shown by Man United
Outrage after Sadio Mane allowed to play on for 10 minutes after being knocked out
You may also like
3 years ago
Gary Neville names the three Man United players who do not suit Solskjaer's style of football
3 years ago
Juan Mata effectively confirmed what everyone knows about Man United in interview after Valencia defeat
3 years ago
Anthony Martial shows why he should be starting with role in Juan Mata wondergoal
3 years ago
Tottenham reportedly wanted Anthony Martial and Juan Mata this summer
3 years ago
Video showing Juan Mata modelling Man United's new home jersey is leaked
3 years ago
Manchester United midfielder Juan Mata linked with shock move to Barcelona
Next Page