Jamie Vardy is reportedly in the process of trademarking his now legendary phrase.

A classic motto, teaching us all about cause and effect. END_OF_DOCUMENT_TOKEN_TO_BE_REPLACED

In an interview with The Times, Jamie's wife Rebekah revealed that she is trying to get the motto trademarked.

Rebekah Vardy also told the newspaper that is trying to trademark the "Jamie Vardy's having a party" song, although the striker has talked of his dislike of the cocaine reference in it.

So proud of my Husband ❤️ @vardy7 I love you xx pic.twitter.com/OYQjh6io6t

"It's worse when there's five-year-olds singing it to her", said Jamie.

"I always turn round and say, 'I don't think you should be singing that,' and the parents say, 'No, it's all right, his cousin's called Charlie.

"He thinks he's turning up to your party with his cousin.'" 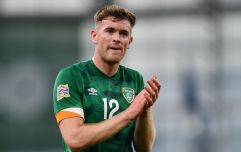 END_OF_DOCUMENT_TOKEN_TO_BE_REPLACED

If the Vardys are successful in with their trademarking, companies would have to pay if they wished to use either bit of Vardy wit.

However, government guidelines state that trademarked terms must not contain offensive language, so the Vardys may have to get a bit creative with their terminology.

May we humbly suggest "Talk poo, get looed?"