Paulo Dybala is one of the most exciting young talents in world football.

But the Juventus forward knows that he is far from perfect and has gone above and beyond with his attempts to make himself less predictable in front of goal.

More often than not, Dybala will shift the ball on to his left foot before he takes a strike at goal and while that typically ends with the net bulging, it allows goalkeepers and defenders to better read what he's about to do.

The 23-year-old is clearly not completely confident on his weaker right foot but he is making significant efforts to remedy that. 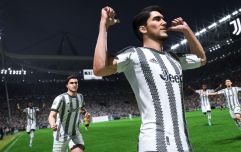 END_OF_DOCUMENT_TOKEN_TO_BE_REPLACED

Certain players, like Arjen Robben for example, are content with being absolutely lethal with one foot and lacklustre with another but Dybala doesn't want to become the type of footballer whose next move is easily predictable.

The young Argentine has taken to writing with his right foot in the hope that it catches up with his prolific left peg.

“I’m left-handed, I even brush my teeth with my left hand,” Dybala told Il Venerdì, as translated by Football Italia.

“I take a pen every day and I try to write, but with my right foot, I put it between my big toe and the little one.

“I work like a crazy person to have more sensitivity and ability. Not just that, I also train with my eyes; to see further, in different directions, to anticipate my opponents and see trajectories."

This dedication applies to his conditioning too.

“[Gennaro] Gattuso, who was then the Palermo Coach, told me not to overdo the weights though, I don’t need to be Big Jim, the explosiveness in my legs is enough.

“Cristiano Ronaldo has scored 360 goals, which is because he’s right-footed but also strong with his left. With one foot you’re easier to mark and it’s easier for opponents to read you.

“In Italy the defenders don’t mess around, it’s a good school.”


popular
“Players flourished when Roy Keane left” - Rio Ferdinand on why Keane was a 'detriment' to Man United
"To be able to call myself the fastest man in Irish history is just amazing" - Olatunde overjoyed after record-breaking run
Cristiano Ronaldo says he will reveal truth about Man United transfer saga
The moment Israel Olatunde realised he qualified for the Euro 100m final is what it's all about
Jamie Carragher on the three Man United players Erik ten Hag can't trust
"I went up to the Italians and gave them a big auld shoulder" - Paul O'Donovan does it again
Jurgen Klopp reacted like everyone else to Darwin Nunez headbutt red card
You may also like
2 months ago
Heartbroken Paulo Dybala in floods of tears after final Juventus game
3 months ago
You're Paul Pogba. Choose your next club
4 months ago
Villarreal call out Spanish paper over gaffe revealing botched prediction
5 months ago
Jose Mourinho reportedly accused referee of 'being sent by Juventus' after being sent-off
6 months ago
New Spurs signing Dejan Kulusevski wore number 44 because of Adnan Januzaj
6 months ago
Aaron Ramsey set to join Rangers from Juventus on six-month loan
Next Page