Fissures are emerging all over the punditry landscape after a night of high drama in Russia.

Cristiano Ronaldo must have been worried as hell as referee Enrique Caceres was summoned to the TV screen near the Portuguese bench to review his collision with Iran's Morteza Pouraliganji.

When we write 'collision', we mean Ronaldo clattering Pouraliganji with his forearm long after the ball had disappeared out of shot. It was reckless but, to my mind, not worthy of a straight red card. 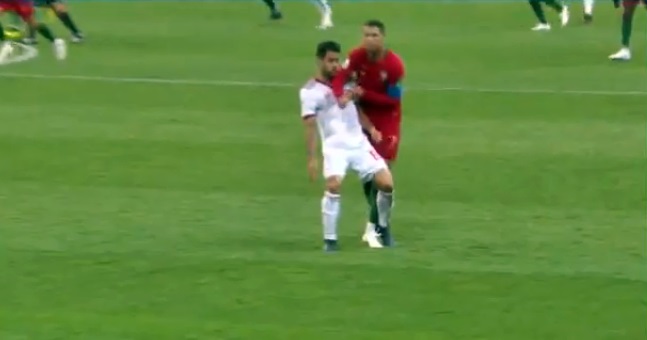 "The referee either sees it as he is trying to get through to the ball and in that case it’s nothing. Or it’s an elbow, there is nothing in between."

Liam Brady went a couple of steps/octaves further when he described the decision as ' an absolute cop-out'.

"He either sees it as he is trying to get through to the ball and in that case it’s nothing. Or it’s an elbow, there is nothing in between..." - Keith Andrews felt that Ronaldo's yellow card was a cop out by the referee.#RTEsoccer https://t.co/kZClbdaPe8 pic.twitter.com/veAlPAuQap

Ronaldo's reaction to the incident, first as he fretted about a potential sending off then his smile and head-shake when he escaped the sanction, was great TV.

Dion Fanning's take on the incident, on the JOE World Cup Minipod, was excellent. He said:

"That long, long wait as we waited to see what was going to happen to Ronaldo. It was like a season-ending moment.

"It was like Season 4 had ended and you were waiting for Season 5. How long did that take? It took forever! Months and months passed as we waited to see what would happen to Ronaldo, who should have been sent off but who wasn't."

We were treated to the added VAR time at the end of injury time and it felt as if the match would roll on into Tuesday morning. Fanning remarked that Portugal vs. Uruguay, in the second round, may take months to complete, with VAR shouts every couple of minutes. An open VAR, if you will.

On BBC 5 Live, former Celtic and Blackburn striker Chris Sutton claimed 'the ref bottled it' when it came to the Ronaldo VAR call.

"Ronaldo threw his forearm. How can you stay on the pitch after that? How is that a yellow card? He had to go in that situation."

Sutton, who got one cap for England back in 1997, shared a BBC clip of his opinion on the matter and it drew plenty of responses, with Ian Wright and Robbie Savage getting involved.

So if I take a swing at you next time I see you... is that reckless or violent?? https://t.co/LNifCkRPZV

So there you have it. Battle lines drawn.

On one side you have Liam Brady, Chris Sutton, Dion Fanning and Keith Andrews. On the other you have Robbie Savage, Ian Wright and the BBC's Mark Lawrenson.

Who's side are you on?


popular
The SportsJOE 12 o'clock quiz | Day 104
James Haskell on text exchange with Peter O'Mahony after Ireland's victory over Scotland
"Shane was just gifted. He could play centre back, centre forward, he had everything"
David Beckham recalls how a trip to Ireland got him in trouble with Alex Ferguson
The SportsJOE 12 o'clock quiz | Day 103
"The academy boys have turned into small monsters over the past few weeks" - Peter O'Mahony
"I have more work done than any player in Ireland" - The Trevor Giles tribute show
You may also like
8 months ago
Real Madrid are La Liga leaders but remain deeply flawed
1 year ago
Messi and Ronaldo top Forbes Highest Paid Athlete List
1 year ago
Feast your eyes upon the new Cristiano Ronaldo cartoon
1 year ago
Cristiano Ronaldo an injury doubt for Juventus' Champions League tie with Ajax
1 year ago
Cristiano Ronaldo fined for mimicking Diego Simeone's crotch grab celebration
1 year ago
Conor McGregor hails Cristiano Ronaldo's attitude after clutch goals against Atlético Madrid
Next Page