'On Saturday February 3, a boxing event run by SK Promotions, which was due to feature five MTK Global signed boxers, was cancelled when the Citywest Hotel pulled out of hosting the event following widespread media propaganda' - read a MTK Global statement on Thursday.

The statement released by the boxing management company was issued in search of their quest for '#FairNews'.

MTK Global cut all ties with their co-founder Daniel Kinahan, son of crime boss Christy Kinahan in February 2017, one of the foremost participants in the Kinahan-Hutch gangland feud. 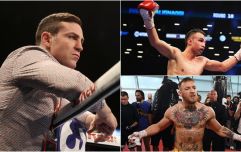 END_OF_DOCUMENT_TOKEN_TO_BE_REPLACED

Kinahan was removed from the company's operations four years after he co-found the company alongside former middleweight fighter Matthew Macklin, and almost an entire year after an event hosted by MTK was thrown into chaos when five men - three dressed as gardaí, another as a woman - entered Dublin's Regency Hotel and opened fire at the crowd, killing 33-year-old David Byrne.

The constant links between the company and Kinahan have irritated MTK, and understandably so, it's hard to thrive in a market where every event you try and promote is in some form or fashion linked backed to a man known in the underworld as 'cancer'.

As such, MTK have decided to sign no more Irish fighters or host any more fight nights in Dublin. They have sent the baby flying out of the window with the bath still running.

However, the boycott is not a groundbreaking deviation from their current standing, as MTK have not hosted an event in the Irish capital since the infamous Regency shooting where Byrne was killed.

MTK have an impressive roster of fighters including Michael Conlan, Jamie Conlan, Carl Frampton, Tyson Fury and Paddy Barnes, all of whom either tweeted or re-tweeted their support for the company's boycott.

Irish media were happy to support me when I was winning Olympic medals for the country then when MTK signed me, (I wouldn’t be boxing if it weren’t for them) they threw me under a bus every time something happened regarding crime in dublin! #fairnews

The campaign also drew the support of Republic of Ireland winger James McClean, who also decided to throw his weight behind the cause. 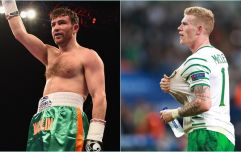 END_OF_DOCUMENT_TOKEN_TO_BE_REPLACED

However, MTK's Trump-esque search for #Fairnews is not only laughable given the company's co-founders undeniable links to the criminal world, but it's also unfair to the Irish sports publications that cover the aforementioned, and more importantly, the Irish public who watch the fighters.

Sports writers who travel up and down the country looking to share stories from the likes of both Conlan's, Barnes, Tommy McCarthy and Frampton are being punished for reporting on boxing and personal stories. Punished, for essentially, doing their job.

Of course, when one particular section of society is punished, another is there to prosper, with Kugan Cassius, co-founder of IFL TV, a web based boxing channel, not only tweeting his support to the boycott but pinning the tweet to the top of his Twitter profile and brandishing #fairnews across his profile picture.

If you want to know more about @MTKGlobal boycott of Republic Of Ireland Media, please watch this video & share https://t.co/7MxJn29VYg pic.twitter.com/JulCWXY58E

Boxing is already fighting an uphill battle for coverage in a country where soccer, GAA and rugby dominate, and where MMA is rising to increasing prominence.

So, to boycott the Irish media for reporting on your company's co-founder's links to crime, when the last MTK hosted event in said country involved armed gunmen storming into a weigh-in carrying Kalashnikov's, is not only misjudged, but is also punishing the Irish public for something that they can bear no responsibility for, yet something they nevertheless had to witness to a horrifying degree.

Of course, despite MTK's impressive list of fighters, Michael Conlan and Tyson Fury are the company's only fighters that would garner any sort of headline traction in the capital, with Frampton seemingly set on fighting out the rest of his career in Belfast.

However, if Conlan is to fight on the island at all over the next few years, any purported bout will likely take place in his native Belfast, as would be the case for Michael's brother Jamie, Barnes and Frampton, all of whom hail from the Northern Irish capital.

Given that just one, to potentially three of MTK's entire roster would have the pulling power to stage an event at the 3 Arena, it's not a boycott with huge implications but rather two fingers to the Irish fourth estate.

MTK don't have a household name that calls the capital home, so to pull all events from Dublin won't have any far ranging consequences that weren't already in place to begin with.

In many ways, their boycott mirrors what US President Donald Trump has achieved in the US.

Trump managed to win a Presidential election by repeatedly slamming mainstream outlets like the New York Times and Washington Post and instead he thrived off his coverage from Breitbart, a far-right American news, opinion and commentary website stewarded by the site's former executive chairman Steve Bannon, who served as Trump's White House Chief Strategist during the first seven months of his presidency.

Cassius' IFL TV is not the boxing equivalent of Breitbart, but they have prospered immensely by focusing solely on boxing and developing relationships with the sport's biggest names, but, from an Irish perspective, it's not surprising in the least that the channel's co-founder is actively promoting the boycott to his own benefit.

Boycotting the media would traditionally be a PR disaster for an athlete, much less a boxer, but in a country where only one of the company's fighters would realistically be able to host a major event, it's a power play to the establishment, a company favouring favourable coverage over honest reporting.

The traditional media landscape is a facet of the past, while alternative coverage could be an outlet in the future for those wanting to disguise or hide from the truth.

It's hard to see MTK Global's fighters benefiting from less media coverage but just because you put your fingers in your ears and decide not to listen, doesn't mean the problems aren't there.


popular
The FootballJOE Qatar World Cup 2022 Geography Quiz
World Cup 2022 Day 12: All the major action and talking points
Cristiano Ronaldo 'agrees £173m-a-year deal' with Saudi club
France demand FIFA change result of World Cup defeat over 'rule break'
Damien Duff makes 'brutally honest' England World Cup prediction after Wales win
Castleknock's Warnock the hero as Maynooth win first ever Ryan Cup final
"Nowadays, even if I don't hit a ball, I don't care as long as we win" - Gleeson learning from the past
You may also like
6 years ago
Relive the bravest three minutes of Matthew Macklin's courageous career
7 years ago
Talks between Matthew Macklin and Julio Cesar Chavez Jr fight are underway
7 years ago
VIDEO: Matthew Macklin returned to action tonight with a second round KO
7 years ago
Matthew Macklin reveals he was caught up in Garda raid on Dublin apartment
7 years ago
VIDEO: Matthew Macklin talks exclusively to SportsJOE about his upcoming fight and how close he was to retirement
7 years ago
Matthew Macklin tells us he's 'excited to get back on track' with fight in May
Next Page