IABA chairman: "Billy Walsh looked me in the eye and offered his hand"

The Irish Amateur Boxing Association has hit out at "scurrilous claims" it believes has been made over the departure of Billy Walsh to the United States' Olympic boxing team.

There has been a stream of accusations and recriminations - most of them squared at the IABA - since Walsh opted to take up a job offer from the U.S Olympic Committee to coach their boxers in Colorado Springs.

It was reported, earlier this morning, that Walsh had been offered a basic pay offer of €95,000 per year, in August, only for the IABA to go back on that agreement.

However, Joe Christle, chairman of the IABA, says everyone at the association is completely mystified as to why Walsh is heading across the Atlantic Ocean.

Minister of Sport Michael Ring then brought both parties down to a September 11 meeting, which dealt with three main concerns - financial terms, Walsh's approval and the approval of the IABA.

Christle says Walsh was seeking his own bonus remunerations but that it was decided to pool all bonuses that would then be split between coaches and boxers, depending on what markers they hit at events.

The IABA chairman then believed Walsh would stay after the final wrinkles were ironed out. He told Pat Kenny, on Newstalk:

"[Billy] looked me in the eye and offered his hand." 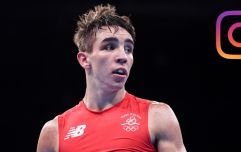 END_OF_DOCUMENT_TOKEN_TO_BE_REPLACED

Christle says he then rang John Treacy [Irish Sports Council] and Minister Ring to tell them 'you can get up off your knees [and] that it was over'.

However, there proved to be a further stumbling block over Walsh's role within the High Performance Unit.

Walsh, said Christle, sid not outline his 'non-financial matters' and did not know if he was the head coach and leader of the team.


popular
Names beginning to emerge from Lions stand-by list for South Africa
The SportsJOE 12 o'clock quiz | Day 351
Ronan O'Gara will never forget his first encounter with Jonah Lomu 'in his pomp'
"I'd play it in the back garden if I could. We've been training for this since last September"
"Some people just have different passions" - Geezer sees where Clarke is coming from
Finally, Gaelic football is returning to our TV screens - what's on and where?
"I’d love to do my Colin Corkery impression and play Junior B football. It depends on the body"
You may also like
2 years ago
Military coups, AK47s and gold medals - the remarkable story of how Ben Ryan guided Fiji to Olympic Sevens glory
3 years ago
Michael Conlan's embracing the lowest point of his career and making it his own
4 years ago
Ireland loses Olympic sailor Saskia Tidey to Team GB ahead of Tokyo 2020
4 years ago
It seems there was just one problem with O'Donovan brothers' appearance on Graham Norton
4 years ago
WATCH: O'Donovan brothers had a Hollywood actress entranced on The Graham Norton Show
4 years ago
WATCH: Ireland's bittersweet sporting year summed up perfectly by top betting surprises
Next Page