Just when you thought we had closed the book on the Floyd Mayweather-Manny Pacquiao fight, the lawyers are getting involved

And it doesn't even have anything to do with Floyd...

A pair of Las Vegas residents have filed a class action lawsuit against Pacquiao, his manager Michael Koncz and his promoters Top Rank over his alleged failure to disclose the nature of his shoulder injury prior to Saturday's fight, as required by the Nevada Athletic Commission. 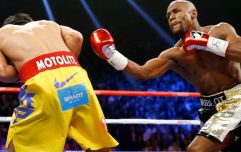 END_OF_DOCUMENT_TOKEN_TO_BE_REPLACED

Pacquiao lost a unanimous decision to the undefeated Mayweather and subsequently revealed he had injured his shoulder some weeks earlier in training camp. Scans later showed the Filipino boxer had suffered a torn rotator cuff.

Now, ESPN reports that angry fans are looking to take Team Pacquiao to court and are seeking more than $5million in damages over what they are claiming is a fraud against the boxing public who bought tickets for the fight, paid the $100 pay-per-view charge to watch the bout on television, or bet on the outcome.

The lawsuit alleges: "Defendants prior to and at the time the plaintiffs and the class decided to purchase tickets; purchase pay per view showings or wagered on the event the defendants knew and had full knowledge and information that defendant Pacquiao had been seriously injured and was suffering from a torn rotator cuff. Defendants further know that such injury would severely affect his performance."

The event was expected to rake in more than $300million in ticket and PPV revenue, while it has been estimated that another $60million could have been bet on the fight in Nevada alone.

Top Rank attorney Daniel Petrocelli poured cold water on the case, saying: "This is a frivolous lawsuit and we are confident it will be dismissed."


popular
Shane Lowry on his Tuesday duels with Rory McIlroy at The Bear's Club
Two Man United players led a furious half-time inquest into Manchester derby performance
Conor Benn's 'banned substances' comments in 2019 have not aged well
Gary Neville confirms he will work for Qatar's beIN Sports during World Cup
Richard Dunne slams Man United for pandering to Ronaldo during games
Ex-Anthony Joshua opponent hopes Chris Eubank Jr gets brain damage
Predicting the 31 biggest knock-out championship games around Ireland this weekend
You may also like
7 years ago
Mayweather-Pacquiao on track to shatter pay-per-view records
7 years ago
VIDEO: Floyd Mayweather was bang-on with his Pacquiao prediction back in 2009
7 years ago
Floyd Mayweather changes mind, says he will not give 'coward' Manny Pacquiao re-match
7 years ago
WATCH: New Mayweather interview reveals tragic upbringing and how he outsmarted Pacquiao
7 years ago
A bag of air from Mayweather v Pacquiao at MGM Grand is for sale on eBay
7 years ago
PIC: Floyd Mayweather takes to Instagram to offer opinion on Pacquiao's shoulder injury
Next Page