That's how much was generated from ticket sales alone for the Mayweather v Pacquiao fight last weekend, more than three and a half times the previous record turnover from the gate in Nevada's history.

ESPN's Dan Rafael has been tweeting about some of the gate records from the fight, and they make for pretty fascinating reading. 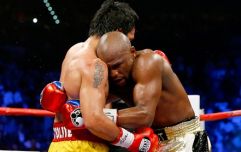 Pacquiao says Mayweather ran away from him, Mayweather calls Pacquiao a sore loser

END_OF_DOCUMENT_TOKEN_TO_BE_REPLACED

The previous record, which stands at $20m generated from Mayweather's majority decision victory over Saul Alvarez in 2013, actually only sold 73 less tickets than last week's superfight, but with average prices for a seat in the MGM Grand coming in at nearly $4,500, the money brought in absolutely dwarfs it.

Incredibly, the three highest gates of all time featured Mayweather, as do five of the top six, meaning he's rich. Very rich, in fact. 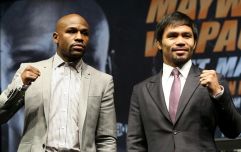 END_OF_DOCUMENT_TOKEN_TO_BE_REPLACED

Nine tickets went unsold, while 45 people were lucky enough to get comps to the richest fight in history. Can't beat a freebie.

And remember, this is all just money generated from the gate on the night. It's believed at least 3,000,000 PPV sales were made, again shattering the previous record.


popular
Shane Lowry on his Tuesday duels with Rory McIlroy at The Bear's Club
Gary Neville confirms he will work for Qatar's beIN Sports during World Cup
QUIZ: Name the 2018 World Cup Goalscorers
Ex-Anthony Joshua opponent hopes Chris Eubank Jr gets brain damage
Predicting the 31 biggest knock-out championship games around Ireland this weekend
QUIZ: Can you name the sponsors of all 32 of these old county jerseys?
Sean O'Brien to join Naas RFC so he can play All-Ireland League rugby
You may also like
7 years ago
Floyd Mayweather changes mind, says he will not give 'coward' Manny Pacquiao re-match
7 years ago
WATCH: New Mayweather interview reveals tragic upbringing and how he outsmarted Pacquiao
7 years ago
A bag of air from Mayweather v Pacquiao at MGM Grand is for sale on eBay
7 years ago
PIC: Floyd Mayweather takes to Instagram to offer opinion on Pacquiao's shoulder injury
3 months ago
Tommy Fury denied entry to US ahead of Jake Paul press conference
3 months ago
Anthony Joshua says he will be a "boxing legend" if he wins Usyk rematch
Next Page