Carl Frampton has had to pull out of his fight with Emanuel Dominguez because of a broken hand sustained in a freak hotel accident in Philadelphia.

An ornament fell on the boxer's left hand and fractured his fifth metacarpal, ruling him out of his comeback fight on Saturday night and putting to waste weeks of preparation and thousands of pounds.

"Obviously I wanted to fight but it just feels like a waste.

"I've been away from my kids. Summer holidays, they've been off school, I've been away, it just feels like an absolute waste.

"Money down the drain. Probably the guts of £30k on a training camp. I've been out in Philly for three and a bit weeks now and nothing to show for it."

Frampton hasn't fought since his defeat to Josh Warrington in December and this was billed as a comeback fight for the 32-year-old.

The injury rules him out for at least four weeks and, obviously, the fight and puts paid to a training camp that Frampton says was one of his best.

"This is the most disciplined I've ever been in sparring, in listening to instructions, in bag work - and then I go and get my f**king hand smashed on a stupid bit of whatever the f**k it is." 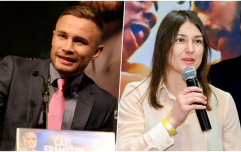 END_OF_DOCUMENT_TOKEN_TO_BE_REPLACED

In the video, Frampton's team explain how the ornament fell on his hand, through a curtain and down on top of the fighter's fist of all people in all places.

"It should be nailed down," he said about the heavy ornament that was knocked over at his expense and, in doing so, knocked over his dream of a comeback.